Nadine El Roubi sets her goals straight throughout a whooping 10-minute track in the form of a mixtape, with 6-hard-hitting freestyles that’s packed with pivotal messages and personal themes.
by Ahmed Khalaf 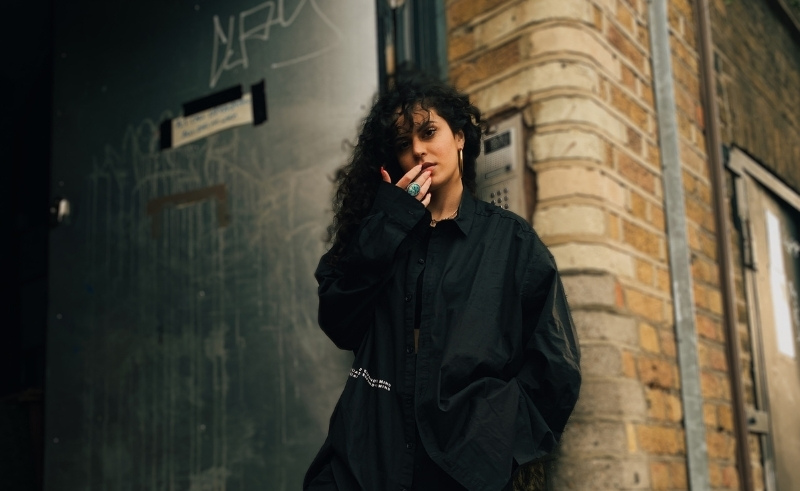 Enigmatic Sudanese rapper Nadine El Roubi was always a person who prefers to reflect on herself and her surroundings in her lyrics, creating a profound fanbase who’d go the extra mile in supporting her immense talents. Nadine’s been teasing a project for a while now, and it is finally that time the project comes to full fruition. El Roubi has recently released her much-awaited mixtape ‘Freestyles Pt.1’, a compilation of verses she’s written over the years, presenting them in a verse-for-verse format, offering straight up, hard-hitting bars that hit home with every transition, mixed and mastered by DJ John Vincent to make it seem like ‘we're just kicking it, listening to my shit in the car’, in Nadine’s words.

Instead of releasing different singles in a mixtape, El Roubi decides to mesh everything into one whooping 10-minute track which shifts across the various sub-sonics of hip-hop, from old school, to boom bap, and even thumping trap productions. Throughout the six singles in the mixtape, El Roubi goes through an array of topics; from embracing her culture, challenging the traditional norms, self love and appreciation, to discussing negative connections and double faced friendships.

Kicking off with ‘FEMALE’, Nadine shows off her enraged side which could be felt as soon as she utters her first bars. Over a head-bopping classic instrumental, El Roubi expressed her frustration of the idea of being labeled ‘a female rapper’ or ‘a female actor’, that essentially she’s ‘a person first and a female after’. This frustration comes from the male dominated industries that look at artists as  ‘female singers’ and not simply a singer, for example. She follows up by ‘SHUTTA’, a hard-hitting trap beat in which Nadine faces her inner demons and reflects on her religion as opposed to the intrusive thoughts we all face as people.

Between ‘ICON’ and ‘UNPOPULAR OPINIONS’, the fatidic MC reflects on her own quality, as a person and a musician, flaunting her lyrical prowess and emphasizing on the themes of self-confidence and self-praise. After some self-reflection, El Roubi reflects on the horrors of the world in the despondent ‘THE WORLD JUST FELL APART’, a lofi work in which she opens the conversation of mental illness, wars in the Middle East, dwelling on how we witness horrific news everyday whenever we go on Instagram.

El Roubi is resilient and without a care in ‘NO CLOSURE’, Can’t let ‘em break ya focus, cut ‘em off with no closure’ the multi-talent states. The Sudanese grandee “unofficially” closes off the album with a message of not giving negative feedback a chance to hold us down, that people would always say whatever they would say, and she would always do what she feels like at the end of the day. El Roubi concludes the album with an encouraging voice note from her manager, Megatronic MGMT, as she brings things to an end with a live alteration of her adored single ‘Hair Up’ at Cairo Jazz Club, along with Wegz on saxophone (not the rapper Wegz), Ahmed Hossan on guitar duties, Mallawany in charge of the bass, multi-talent Kubbara offering his keys talent, with Marwan Wahid banging the drums.

Nadine El Roubi is a force to be reckoned with, as the highly-enthusiastic and extremely passionate Sudanese singer and rapper will stop at nothing to reach her goals and ambitions. As it is indicated in the title, this is just part 1 of her ‘Freestyles’, so expect another fiery compilation from this superstar in the making.