If you think Rock n’ Roll is still about inciting anarchy and chaos, Rokam are here to change that, in the most bewildering way.
by SceneNoise Team 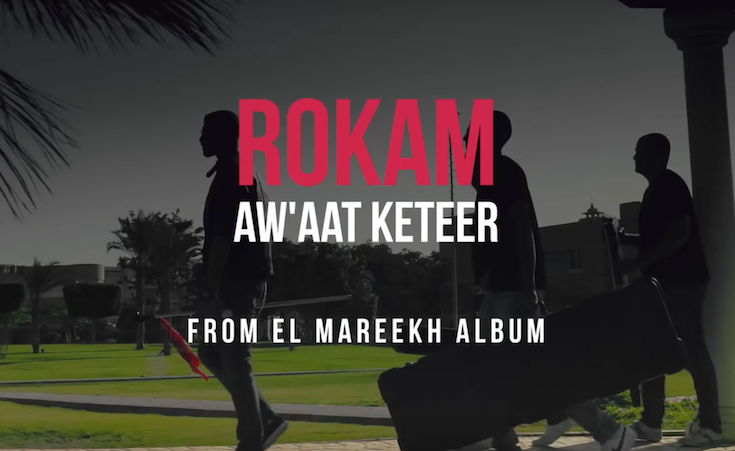 Aw’aat Keteer may sound like Nelly Karim’s new soap opera, but it’s actually something much more benign. The video starts with band members all clad in black and marching in uber-cool slo-mo into a training pitch (they’re off to promoting fitness and sportsmanship already).

Lead singer Omar Kamel starts explaining how he woke up early in the morning to find himself knee-deep in debt and how he thought about packing his stuff and making a dash for it, but also how it didn’t seem like a very sensible idea (we agree, running from your problems never is, anyway). For some reason, the football players keep charging at him and his balanced way of thinking. The band’s preaching continues on to tell the story of someone working in a teaching position at a university and struggling to find time for their master's degree, a religiously Rock n’ Roll topic. This educational whiz kid is portrayed by their keyboardist who uses a pair of reading glasses and a book to Dicaprio himself into this mind-bending performance.

The main theme of the song seems to revolve around repeated failure and maintaining hope, the band did a great job with the instrumentation and the lyrics, although very clean and straight to the point, they still seem like a breath of fresh air.

We can't wait to see what else this band has to offer on their upcoming work. As for now Aw'aat Keteer is an overall light-hearted effort and not at all a bewildering piece of work. Jokes aside, Egypt needs more bands who just step up and do their thing regardless.