We chat with Nader Mansour and his Bishops after their last Cairo gig at CJC. 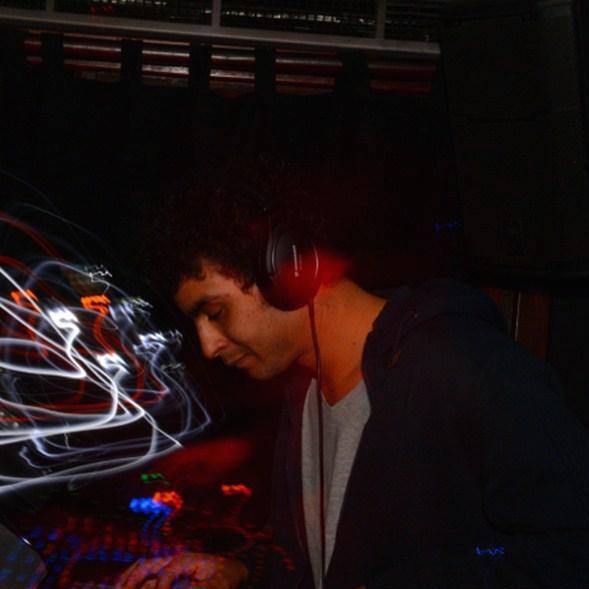 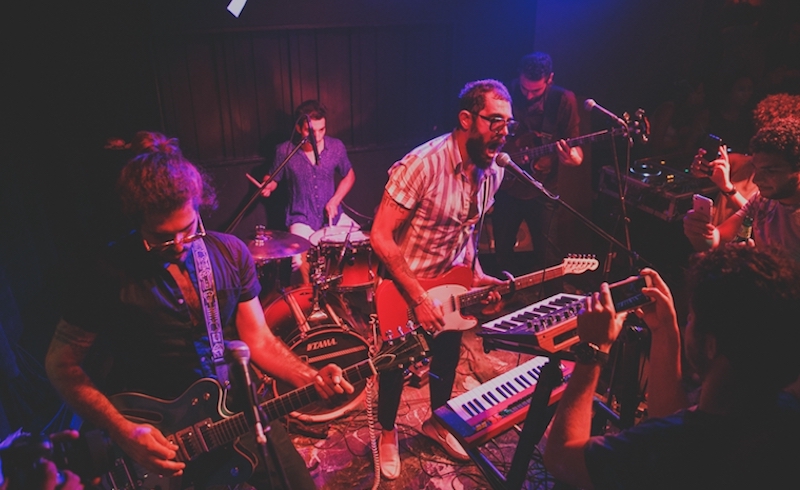 As I stepped onto the smoke filled dance floor of Cairo Jazz Club, I was taken aback by the sounds coming out of this four piece band that I had heard so much about. The Wanton Bishops have been on my bucket list for a while. The hype surrounding them suggests they are the greatest original blues rock band to come out of the region - ever. The number of times they popped up on my news feed on posts by the world's biggest international publications made me feel that I'd known the band for a long time.

It was a Thursday night, CJC was jam-packed full of punters losing their shit over front man Nader Mansour's antics. Wrapped in white feathers, beads of sweat rolling down his forehead, slamming his guitar to smithereens while still managing to drop a couple of harmonica lines every now and then, with a rack of two synths at his disposal - a true multi-instrumentalist talent. The club was in full swing, people cheering their asses off, as the band dropped a barrage of original songs, with a sound and aesthetic akin to sixties English super band Humble Pie. It was as if Steve Marriott had been resurrected and stands before me, only with Arab blood this time. At one point, as Nader Mansour was pinching Georgey's nipples - his second guitarist - in a rumbustious display of showmanship paired with an absurdly good and unfailing musical output. I started realizing that they're worth the hype - I had in front of me the greatest Middle Eastern band I'd ever seen. I watched Jim Morrison pull his dick out to a crowd of thousands, and Justin Timberlake rip off Janet Jackson's bra at the Super Bowl - completely exposing her right boob - but this was all on screen. That Thursday Night Live at CJC - although no nudity of any sort took place - brought back memories of such incidents. The utmost disregard to norms or traditions, a full frontal assault on our mostly uptight, conservative communities - and Georgey's nipples. I just had to speak to the Bishops, but, most importantly, I had to speak to Nader - so I approached him for an interview. We stepped outside the club, and on the sidewalk of Sphinx Square I chatted with Nader Mansour and his Wanton Bishops.

So you guys had a problem with getting your drummer into Egypt?

Nader: It took us four days to get the visa, we got it this morning but we lost our drummer in the process because he works in a daytime job. So we flew Frederico from Portugal and he learned the songs in a day and a half? Pretty much, two days maximum.

Frederico: It was good.

Nader: It was tough, Jesus! But yeah, we pulled through. That’s rock and roll.

Over the years, have any members changed?

Nader: Yeah, it started with Eddy and I and then we would hire musicians locally. But then Eddy had another work opportunity, a big work opportunity and a new lady, and wanted to get married and all so he had to stop touring. He still does the albums, he records, but he can’t tour. Okay so you’ve been to Egypt before several times…

Nader: Yeah man, one time. But in my dreams, many, yes.

Do you notice any difference between here and back home, or any other places you might have played at within the Arab region?

Nader: I think Arabs in general are on drugs and that’s healthy. You can’t write that right?

Nader: Yeah you can, all right!

Nader: But you know, now I can only see things in common actually, and it’s that everybody is into electro. Rock and roll is a dying breed, but we’re not gonna let it die.

Throughout the years that you guys have been playing, you managed to amass a really large audience while staying true to your sound without going commercial. And you play original music only. Who is the driving force behind the band? Who has been taking care of the different aspects when it comes to management, public relations, and so on. In other words, how did you manage such widespread success in such a short amount of time?

Nader: Look, I did everything myself from the very beginning. Until a certain point, where you start amassing [an audience], but managers, agents, promoters, and all that - you start developing partnerships in different countries. But this shit, I mean, as a starting band, you can't find them, they'll find you. When it’s time, they’ll find you. Just make noise on your own.

Okay, so tell us a bit about your touring schedule, how hectic does it get? What is the biggest number of gigs you've played in one week?

Nader: Nine, nine gigs in one week, and seven flights, in that particular week. And the last one almost crashed, this is how fucking hectic it can get.

You’re making a living solely off music. Is there anything else?

Nader: Yeah, I considered prostitution. I still consider it every now and then. But, no there is nothing else.

How long did it take you, since the moment you started learning music and working on your craft, to be able to make a decent living?

Nader: It’s still not decent. Because I reinvest 80% of everything I make. If you want to make it bigger, you just can’t stop. So you live with 20% of what you make. I have a decent car, I don’t own a house yet. I don’t know if I ever want to because I’m always on the road. But, decent, decent? Maybe in a couple of years, so that would be seven years.

You seem really confident that you’re going to make it within a specific amount of time.

Do you really believe that a musician would be able to visualise success and go for it regardless of crowd response or outside factors? Are you in control of most of the factors that can lead to success? Or do you think it relies more on people accepting your sound?

Nader: First of all, I am a control freak, yes. So I try to control everything, even the crowd's perception of what we are. But that being said, creating music is a very selfish process. You do it because you’re in pain and you want to say things. So that’s the first pleasure you derive out of it. Then, if the crowd likes it and connects with it, even better. So you just do your music, cross your fingers, and hope for the best - honestly there is no rule.

Regarding what you’re doing with your multi instrumentalist talent…

Nader: I play five instruments badly. I can’t play one properly. I wouldn't know how to play Hotel California on guitar, I don’t.

So, like, all of that guitar you’ve been playing tonight, that…

Nader: That’s shit. That’s absolute shit. I don’t know notes, I don't know chords. I just play my shit. I can only play my stuff, you know?So Frederico, this is your first time playing with the band?

Frederico: This is my absolute first time, yes.

So you’ve played with many bands before I guess.

Frederico: Yes, back in Portugal.

So, what was your impression? How did it go compared to other bands you have played with?

Frederico: I played in rock and roll bands. Originals, it was a band of mine. But, it was nothing compared to this. This just is amazing.

How long did it take you to rehearse or learn the tracks? I heard that you just picked up right away.

Frederico: I don't want to lie. But I think Nader called me less than two weeks ago and asked me if I wanted to do the upcoming full tour. So I was like okay, I'm going to prepare in the future. But then he called me and said "Okay, when can you get to Beirut?" Like next week, it was like three days to go. I said yes, I flew to Beirut, and rehearsed as much as we could - it wasn’t much.

I’m sorry if I don’t know all of your names.

Nader: That’s all right, Antonio is on the bass, and Georgey is on the guitar.

Who has been playing with Nader the most?

Antonio: That would be me. How long have you been playing together?

So can you tell me how it is playing with him as opposed to other musicians you've played with before?

Antonio: Honestly man, I’m a very easy musician. I’m water, I blend with anything. And Nader is like an awesome guy, we just clicked, and it just happened, you know.

Georgey: What's cool about Nader is that we’re a small music community in Lebanon and we don't all have time to go tour with him. So every guitarist that comes with him, like, gives his own stuff to it. So it makes his sound [different every time].

Antonio: This is what Georgey does.

Georgey: I had to learn blues.

Antonio: This is what he brought to The Bishops. So do you play any other instruments other than bass?

With The Wanton Bishops?

But you never studied? 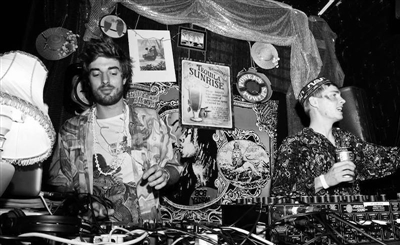 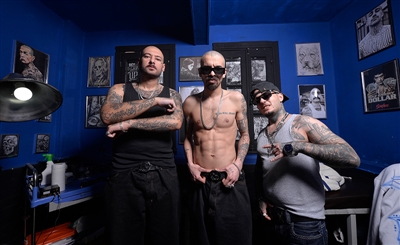 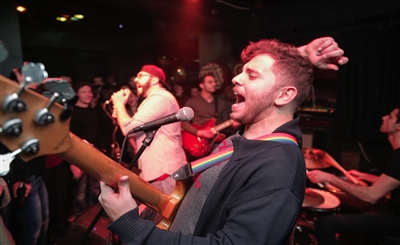