Touted as a 'Psychedelic Gnawa Blues' band, the Moroccan-French quartet's debut LP on UK label, Real World Records, is as stylish as it is dense and as sophisticated as it is festive.
by SceneNoise Team 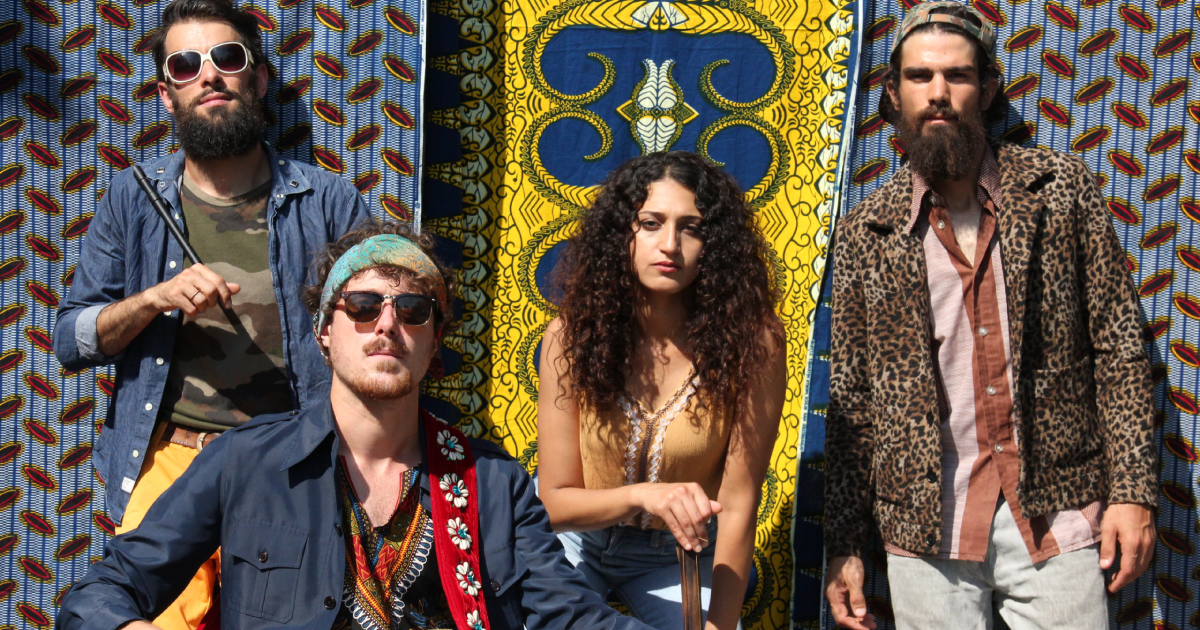 Earlier this year, UK label, Real World Records, announced that they had signed what they were touting as a ‘Moroccan-French power quartet’. There was a genuine sense of excitement about Bab L’Bluz that leaped out of every announcement, every piece of colourful adjective-laden literature released about the band. That excitement was justified in May, when the foursome released the first single from their debut album, Nayda!

The introductory track, ‘Ila Mata’, lived up to the hype and all those colourful adjectives. The swaggering, languid song fit the band’s billing as ‘psychedelic Gnawa blues’, the traditional sounds of Moroccan and Sub-Saharan Gnawa lending themselves seamlessly to the exotic and experimental instrumentation of psychedelic music. The track also put frontwoman, Yousra Mansour, front and centre, her delivery of lyrics inspired by Tunisian poet, Anis Shoshan, providing a sense of soul and sensuality to a track that preached a message of “awakening the sleeping consciousness of a majority of individuals, indoctrinated by racist statements,” and “a call to search for what can unite us instead of going towards everything that divides us.”

A little over a month after announcing themselves in a hazy, colourful blaze of glory, their debut album, Nayda!, has arrived and showcases Mansour, along with Bab L'Bluz co-founder,  Brice Bottin, as well as Hafid Zouaoui and Jérôme Bartolome, diving deeper into an exploration of music from Africa.

“We are fascinated by the origins of Gnawa culture and its musical similarities in parts of the Middle East,” says Bottin, who plays the guembri (a three-stringed bass plucked lute also known as the sinter), on Real World Records' wesbite “The African blues includes other pentatonic music: Mauritanian hassani,” he adds of the band’s other eclectic influences. “The Berber music found in Morocco’s Atlas Mountains. The music of Mali, which is the true source of the blues, as well as the true source of Gnawa music.”

At their core, however, the band ultimately consider themselves a rock band – but one that does things quite differently in switching out traditional guitars for instruments native to Gnawa culture. “We use the awicha as a guitar and the guembri as a bass, both at different tunings,” Mansour explains of their approach. “I fell in love with the trance grooves of Gnawa music and took up singing Gnawa-style at home and with friends,” she says, while also adding that realising and honing that sound was the least of her worries. “There was resistance at first because I was female.”

In spite of this resistance, Mansour – whether through deliberate manufacturing or divine fate – is positioned as a charismatic warrior of a frontwoman. She’s more than an agent or mouthpiece for the justice, unity and rebellion that the album’s lyrics are steeped in; she is the rebellion, the source of the band’s heart and drive.

She opens the album with a ululating war cry in first track, ‘Gnawa Beat’, before it launches into instrumentation that rings of desert blues and a dash of Nubian flavour. After the album’s highlight track, ‘Il Mata’, track three, ‘El Gamra’, is some sort of fusion of dancey garage rock and Gnawa, the lyrics – sung in the Moroccan dialect – praising the almighty moon and peaking with thrilling harmonies. ‘Glibi’ dials down the pace and draws from the bluesy Tarab Al Hassani music of Mauritania, while the lyrics are written similarly to the Tebraa poetry sung by women in parts of Morocco and the Western Sahara.

Mansour is at her purest and most quixotic in sultry number, ‘Oudelali’, which is also sung in the Moroccan dialect, while the following track, ‘Waydelel’, is a cover. Sung in classical Arabic, the track was originally written by one of Mauritania’s most revered musicians, the late, great Dimi Mint Abba, and the lyrics celebrate the Prophet Mohamed. The track is given the Bab L’Bluz treatment and is elevated further by the contributions of Moroccan instrumentalist, Aziz Ozouss, most notably with his one-string ribab playing. The only English lyrics on the album come via 'Africa Manayo', which highlights the thousands of years of struggle that the continent has suffered against a fitting mixture of an Afro-beat, a rousing Berber sample and the ethereal children's choir.

Faint fuzz wraps the following track, ‘Yemma’, and delivers a defiant and powerful message of motherhood, while ‘El Watan’ steers things back towards a more psychedelic rock sound, thanks in part to featuring Moroccan Gnawa artist and guembri player, Mehdi Nassouli. The 10th and final track of this winding record provides a fitting climax.  Named simply ‘Bab L’Bluz’, it acts as a kind of emphatic full stop to proceedings, rattling and shaking on a celebratory tone – it’s the kind of song that transports you to a beachside campfire, where everyone and anyone is welcome.

Nayda! is an utterly unique album, but needs at least a second, immersive listen to truly understand why. A first listen will have most categorising these songs as best suited to a colourful and visceral live performance, Mansour’s poise and charisma making for a perfect on-stage, sonic centrepiece. But the true artistry in this album is its deftness as much as its colour, its moments of subtlety as much as its moments of unbridled emotion. The perfect example of this is the various modes of distortion and reverb, which are used intelligently, without masking the other sonic elements and instrumentation. Even more significantly than that, Nayda! is indeed dense in concept, but it glides quite elegantly through a unique cross-section of African and Arab influences, never losing sight of its identity, while delivering its messages stylishly and sophisticatedly.