For the last few years, the Dutch-Sudanese artist has been gaining more and more fans off the back of a spate of singles, collaborations and guest spots. With her long-awaited debut EP, however, she demonstrates the poise of someone with a much deeper discography, as she effortlessly traverses a range of different emotions and moods. 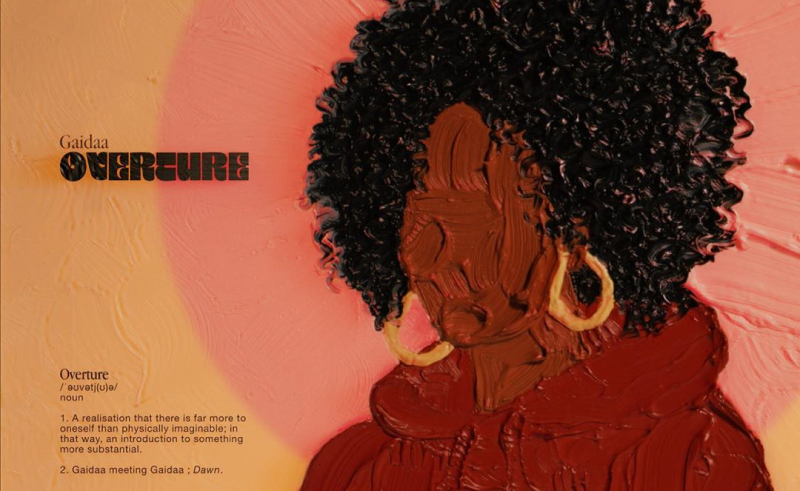 Overture might be Gaidaa’s debut EP, but the Dutch-Sudanese singer is no newbie. Over the last two or so years, she has emerged as a uniquely versatile artist, traversing between R&B, hip-hop and neo-soul with a refinement that has allowed her to establish a distinctive voice as an artist. Some will have first taken note of the singer in 2019, with her soulful ode to Sudan, ‘Morning Blue’, which features on her new LP. Others might have caught onto the hype a year prior, when she featured on Dutch producer Full Crate’s ‘A Storm on a Summer’s Day’, in which she smashed through the confines of being a ‘guest vocalist’ to truly make the track her own.

More recently, she served up another taste of the album in April, with the irresistibly catchy and upbeat neo-soul number, ‘Falling Higher’, which is undoubtedly one of, if not the standout track on an album that’s otherwise coated in an iridescent layer of decidedly more laid-back sounds.The first track, ‘I Like Trouble’, sets the tone, opening with the simple combo of Gaidaa’s vocals and guitar. It also sets the tone in terms of Gaidaa taking centre stage. The production is light, simple and clean; there are no gimmicks or musical fads to be found in this album. The opener eventually picks up to cathartic, emotional closing, as she proclaims “I just wanna be free.”

In her second track, Gaidaa takes us back to the late 90s/early 2000s, with the help of Chicago rapper, Saba, and Amsterdam-based artist, Jarreau Vandal. Again, it’s a cleanly produced, uncluttered piece that lets the artists take centre-stage in a kind-of all-purpose, all-hours track.

The guitars are back in ‘Ride My Way’, which harks back to the era when neo-soul was led by the likes Erykah Badu and Jill Scott, before we arrive at ‘Morning Blue’, which was originally released at the height of the Sudanese Revolution - a major catalyst for a wave of music from Sudanese artists. On her part, Gaidaa’s message is one of hope – but hope confined in the chaos of the uprising.An interlude does exactly what interludes should do, in that it provides a break in the album, before launching into a second half that ‘Still Water’ shifts the tone for slightly. It’s a more playful track than what came before it, the skittish beat making for a subtle contrast against more of those jazzy, sunny guitars.

It naturally then moves onto the infectious, bass-driven ‘Falling Higher’, before closing things with another Dutch rapper, Joshua J, and more bright and bubbly R&B production that unexpectedly uses a pseudo-reggaeton-inspired, bare beat.It’s an overall quite eclectic album, but one that still very much feels cut from the same cloth – a feat that many artists take years to achieve. Yes, variety is the spice of life and versatility is a virtue that artists wear as a badge. What often happens, however, is that this versatility spills into incoherence. This is not the case with Overture. It flows softly and seamlessly from one track to the next and, though it pulls influences and sounds from a number of places, it all makes sense as an album, which is also partly owed to the forgotten art of ordering tracks in a way that makes sense. On first listen, you’ll hum and tap along. On Second listen, you’ll begin singing along to the hooks and the peaks. It’s the third listen, however, that you’ll begin to appreciate the artistry and storytelling of a confident artist that is still very much at the dawn of her career – a sentiment that’s echoed in the album’s title.