Teaming up with Tunefork Studios’ fundraiser, this last compilation from Ruptured’s extensive radio sessions aims to give back to the community following the Beirut explosion.
by SceneNoise Team 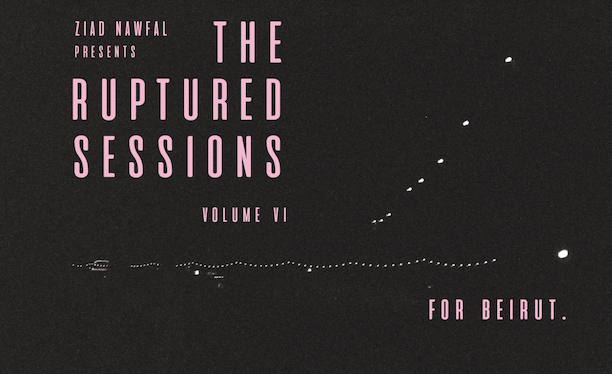 Lebanese independent label Ruptured Records has released Ruptured Sessions: For Beirut, an extensive compilation put together in order to aid the relief effort for rebuilding Beirut by supporting its musicians, many of whom lost their equipment, studios, and livelihood in the aftermath of the August 4th explosion which devastated the Lebanese capital.

Compiled from the live sessions of Ziad Nawfal and Fadi Tabbal’s long-running radio program “Ruptures” on Radio Lebanon, Ruptured Sessions: For Beirut spans ten years of music, recorded between December 2009 and August 2019, and is the sixth and final entry in the Ruptured Sessions compilation series. Initially starting off as a radio program, Ruptured soon evolved to the point where artists were brought in to perform improvised, impromptu live sets in the studio, eventually leading to Nawfal and Tabbal recording these sessions and releasing them in genre-specific compilations to showcase the different facets of Beirut’s alternative scene.

“With the other five volumes of the Ruptured Sessions compilations we tried to have one mood going through the whole album. The first one was folk music, the second one was experimental and free jazz, the third was pop-music — it had Mashrou’ Leila on it — and the fourth and fifth were mostly electronic music. So we tried to do the same with this one, to create one mood [but not] confine it to one style. [We picked] songs that would work together, even though they’re from different genres” Nawfal told Scene Noise.

As an explicitly philanthropic endeavor, all proceeds from Ruptured Sessions: For Beirut on Bandcamp are due to be contributed via Tabbal’s Tunefork Studios and their recently launched ‘Beirut Musicians Fund’, which aims to help Beirut’s musicians replace damaged and lost equipment.

“[Fadi] donated a lot of his time and energy to this project [...] and ever since the blast he’s been going around to musicians' houses to evaluate the damage, and those who he can't go see in person he’s called to find out what’s been damaged, and what money they need.  He’s made a list of musicians who need [housing], and a list of musicians who need new instruments. [The Beirut Musicians Fund] is handling the equipment side of things.”

[Ruptured Sessions: For Beirut is made of] old recordings; a lot of these songs exist already in a different form, so we might as well release them now and for a good cause.  [Helping out] is the only thing we can do.”