Hashem Kelesh's (AKA Dijit) sounds may seem like noise at first, but there's a method in this madman's game that produces this intense melange of sounds. We speak to him ahead of his Middle East tour as one half of the duo Malafat…
by SceneNoise Team 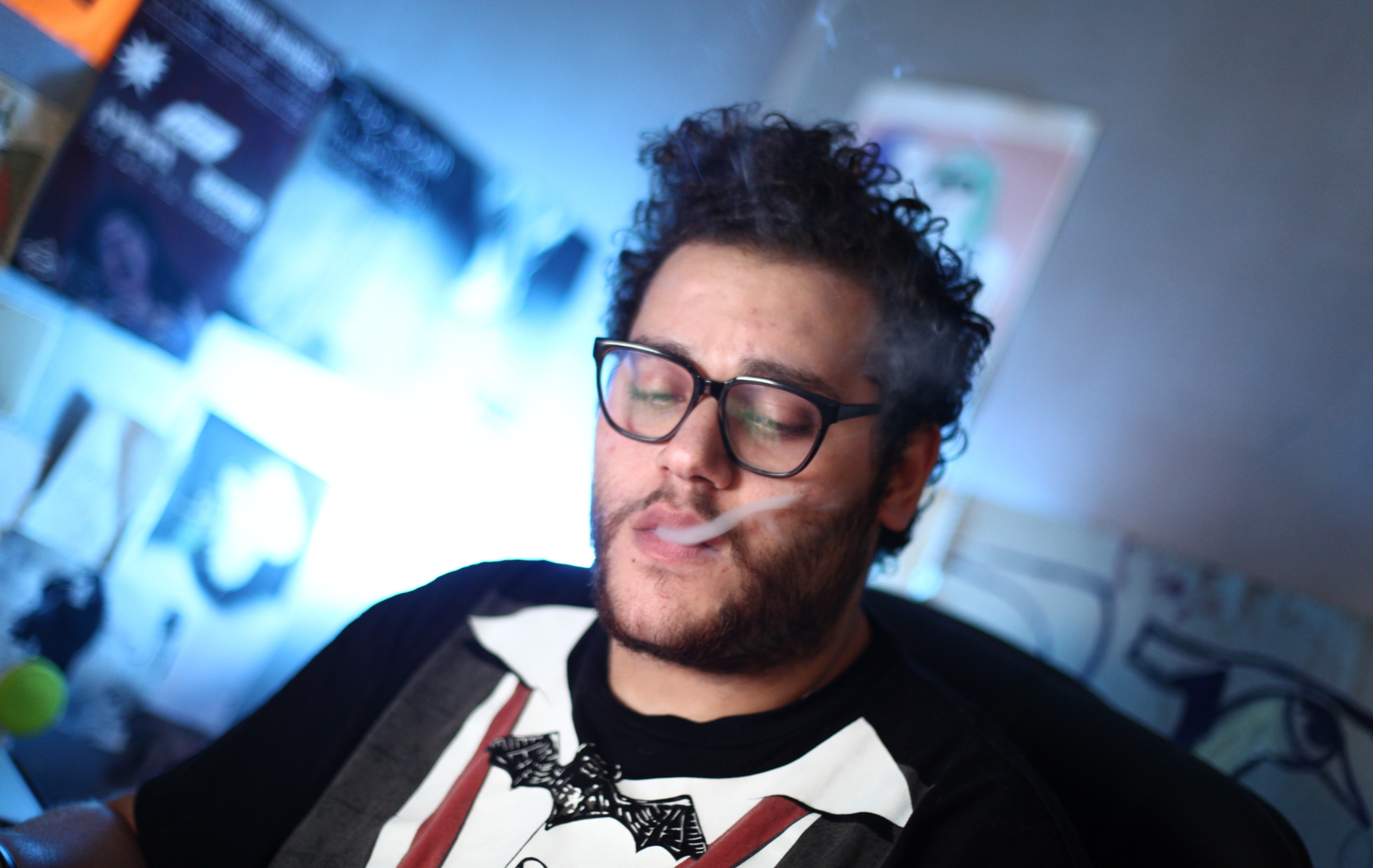 In 2011, Hashem L Kelesh sits on stage at a public concert in Rawabet Theater Downtown and proceeds to play abstract noises from his laptop, drenched in vocal samples from religious madh… with Arabic porn playing as the visuals in the background. Veiled women gasped, people began to leave and he hasn’t been asked to play there since. This was two years after his first ever gig as experimental artist Dijit, at Sakia’s ‘Cairo Fuze’ festival. After a line-up of Hip-Hop acts the first day and Trance the next, Dijit was the only left-field performer - “Everybody left when I played. It was amazing,” Kelesh recalls, chuckling in his seat amidst a nest of music equipment, behind his trademark black frames.

To “get” his art you need to “get” him, and to get him there was no better place to meet him than “The Room” - his bedroom-cum-studio and shrine to a life’s work of “fucking about,” as he often labels his infinite catalogue of paintings, illustrations, photography and music. From an outside perspective, the theme that threads through all his work is a sense of vulgarity, seemingly born from a self-destructive need to repulse or shock, but there is always a method to his madness and as Aristotle once said, there is no great genius without a mixture of madness.

Kelesh’s distinctive brand of genius may never be appreciated by an Egyptian society, one whose behavioral nuances are constantly scrutinised through his art in an attempt to explore and break down the barriers the masses uphold.

“Everyone sees it differently… Nudity doesn't really matter, you can be walking around and find a homeless person totally naked running in the streets and you wouldn’t get the same reaction as seeing naked people on screen at a gig. It’s not about nudity or sex; it’s about men and women together, this is the problem... like how they cut out innocent kisses in Egyptian cinema.” He starts rolling another cigarette before contemplating the anecdote; “You know, in 2009, Google said Egypt is number one for searching the term ‘sex’ in the world, and then I met a guy who believes any woman who wears pants or jeans is a whore, so whatever happens to her on the street is cool... This is what is interesting. So it would be totally fake if I do art about trees, and cool colours and nice things..."

Kelesh first began experimenting with electronic music in 2008 after five years of making “horrible” Rock music, and settled into his niche of grinding synth cuts, frantic  alarm sounds, pitched vocal samples and erratic 8-bit-reminiscent grooves compiled together as a sort of visceral walls of noise. “It was basically just organised noise. Very weird, bad music, cut with soundbites from other songs or movies. I guess back then there wasn’t really a scene for this at the time. I had no idea what the fuck I was doing. I mainly used Fruity Loops (zero quality, complicated and completely stupid software), writing the notes on a PC keyboard, and it had nothing to do with music.”

Nowadays Kelesh, despite not labeling himself as a musician, uses Ableton and has a complete grasp over the software and an undoubtedly talented ear, demonstrated by an impromptu session after the interview where he effortlessly creates this wonderful bass melody and beat in a matter of minutes. But the essence of his musical lean remains experimental through and through; for the amateur ear his sound may well be inaccessible and too abstract, but for the his tens of thousands of SoundCloud listeners and cult following in real life, there is an emotional richness to what he does that is beginning to be respected.

“Eventually people started liking it. I guess people thought it was cool. Maybe they didn’t get it but they thought everyone in the underground scene plays very nice music, a version of something else, and here’s this guy doing something completely random and no one knows who the fuck he is."

Randomness is the essence of Kelesh’s workflow, and it seeps through into Dijit's recent scattershot productions. His vast catalogue of online releases lack comparison, showing odd progressions from rough-cut Electro and Drone, to dark ambient jigs to spoken word poetry. Occasionally you will find this special groove and a beat, and it’s infectious, but then the track will take a 180 degree turn. But the randomness doesn’t necessarily mean it is void of reason; his artistic motivations are always a representation of the conflicted community we live in.

“Look at Egypt today, you want Ikhwan, no fuck Ikhwan, kill them. You want revolution, no fuck that, put them all in jail, they fucked the country. You want the army? No, they killed everyone... So we end up at this point where there is literally no logic here whatsoever, there’s nothing. People don’t know what the fuck they are doing. So when I think about making music or taking pictures these are the ideas that come to me. I can’t actually make something that will make sense, because nothing makes sense, it’s totally random. I would be lying to myself and anyone listening."

Aside from the haphazard character, Dijit’s music embraces mixes that are somewhat intentionally rough, another product of environmental conditioning. “I have this theory; since I was born in Cairo and I was exposed to everything here from TV to the streets to radio, I think my ears are made to listen to certain frequencies and not others - you absorb things subconsciously, this constant dawsha... I think that is the difference, you listen to kids playing music in LA for instance and the music is very simple, not necessarily good, but clean, in a way that you rarely find here in the Middle East."

While many underground artists today use the term experimental loosely to describe a sort of mélange of different genres plugged together, Kelesh’s uncompromising attitude towards the unexplored puts him both at the forefront of Egypt’s burgeoning alternative scene, but also makes his music a generally unknown commodity. “At the end of the day, people want to be successful and good at what they are doing, but if I am trying to make relatable music, I might as well just do Tamer Hosny. People should get this idea of what people might think out of their minds,” Kelesh explains, giving a hint as to where his obscure genius comes from; a complete lack of filter between his expression, both verbally or in his art. “The most important thing you should ask is not what you are making but why you are making it, and you must find the answer to that.”

That, it seems, is the difference between good and bad experimental music. The strangeness of the product is backed up by this feeling that the producer is chasing sounds, no matter their congruity, from a place of meaning. “The thing is, when it comes to experimental music, you should have a concept. I know exactly what’s going on. It's experimenting with sound but I definitely want whoever is listening to it to come up with something at the end.”

Taking inspiration from the likes of legendary noise maker Aphex Twin, he explains “It’s a matter of taste. When you listen to Aphex, some tracks are fucked up, pure noise, no beat count. But you can feel it’s coming from a very solid place and he knows exactly what he’s doing.”

Kelesh looks back to the days of the revolution when many musicians began to garner popularity by taking sound-bites from TV and protests and put using them in their music, a “safe” move in his eyes. “I don’t like anything political at all,” he continues rolling another cigarette, “Politics and anything shouldn’t mix. It limits everything. People will only remember this piece of art when they talk about that specific incident but that’s it. All the people who did tracks about the revolution in 2011, fast forward 20 years, and no one will even think about their music.“

But fast forward to today and Kelesh, who doesn’t like anything political at all, has teamed up with none other than the popular politically fueled anti-establishment spoken word poet Ali Talibab to form Malfat band. Why? Because being an experimental musician doesn’t just mean producing noise outside the parameters of the modish zeitgeist; it means experimenting with your audience too and not just sitting in a room whiling away at volatile beats, but sharing them with a new crowd and seeing what the reaction is. “By 2013, I'd kind of established my audience, but it makes me try to fuck things up more…"

"I like that his [Ali’s] audience is totally different, and there is no way in hell his audience would listen to my stuff normally.” They met after both Kalesh and Talibab’s band El Manzouma were invited for a jam night at underground venue Balcon Lounge in Heliopolis and now Malafat are currently putting the finishing touches to their first EP, which they will be debuting on a tour around the Middle East starting September 25, at Radio Beirut and passing by Jordan's WowBaladak Festival before ending at Musée de L'art in Tunisia on October 19.

“When we got together for Malafat, I thought politics is boring, so let’s do something else for the EP; make each track totally different. I can’t tell you that if there is any theme for the whole thing but it is basically about this idea of life and death, so it's not particularly political; more personal. “

For this project, Kelesh has toned down his eccentricity, with his talent as a composer shining through in each track and providing an exciting bed to which Talibab’s intense prose rests on. The sounds are still undoubtedly Dijit, but the grooves are menacing yet accessible, formed from a more traditional Trip Hop or Ambient field with downtempo beats.

Kelesh tells me how at first Talibab wanted to go full-on conceptual with the EP, a 40-minute opening track with just the sound of airplane engines and nothing else. “I’m the guy for this!” he jokes. “But it just wouldn’t appeal to anyone. I thought I should respect the audience a little bit.”

It seems through this new project, Kelesh is turning over a new leaf, tired of being ostracised and alienated by the industry despite his creative intellect, and is ready to make a career out of what he does. The tour is even called "Malafat Tour Alashan Nakol." He plays me another two tracks from the EP, one quaint intro which interludes into a Nina Simone track, and the other a beautiful melodic journey that’s inviting as opposed to challenging like his earlier work.

The release on the last piano fades away and I’m thinking, 'Wow, this is substantial, new and a lot of people will like this, maybe he’s really growing as an artist who’ll be appreciated for his talent.' He then puts his hand contemplatively over his mouth and stares into the distance… “You know when we’re done with this tour; I think I might go back to making cheap sounds on Fruity Loops...”