SceneNoise Contributor Frank L'Opez dives deep into the Wild Wild East of Nyege Nyege Festival where 300+ alternative artists from across the continent perform amongst endearing chaos in Itanda Falls. 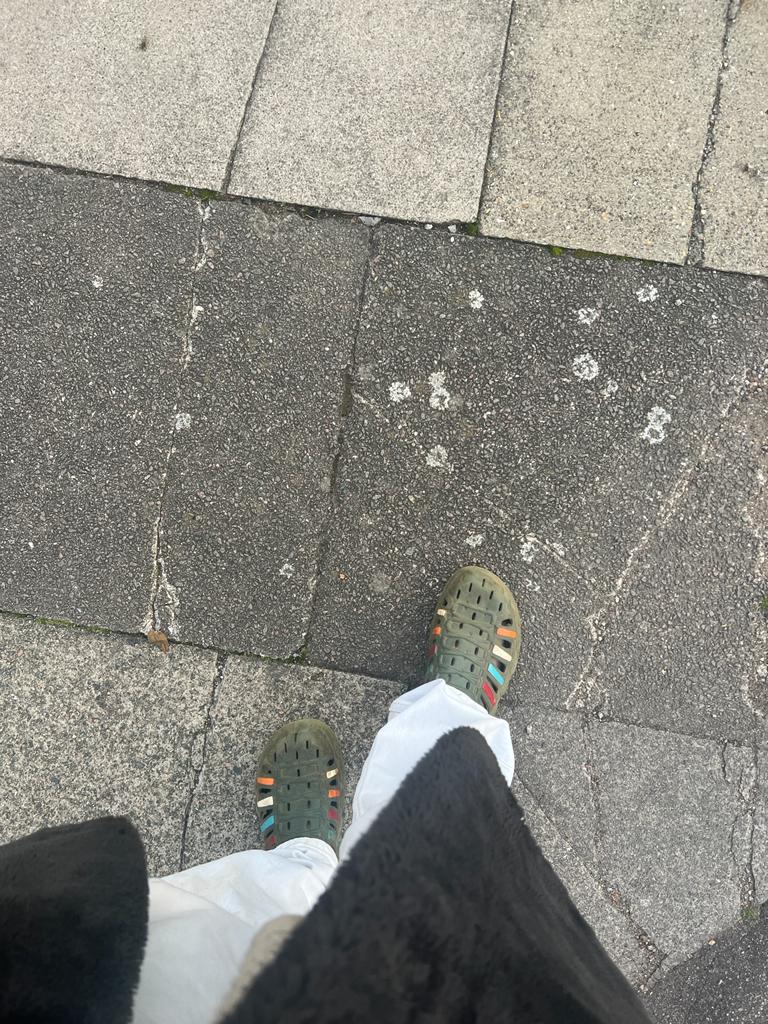 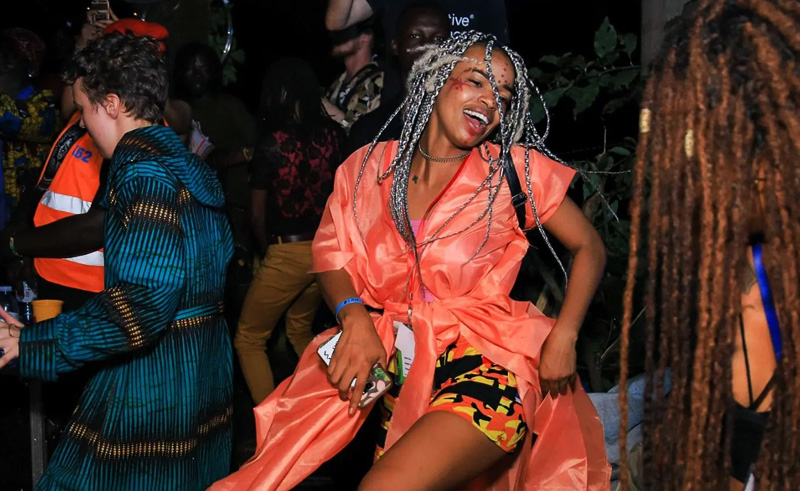 I lie on my bed in an empty hotel as the electricity cuts across a Kampala hit by ferocious and heavily vertical downpours. There are floods across the region, an Ebola crisis and - in two days - there will also be the Nyege Nyege festival, Uganda’s raucously underground dance music event that, this year, threatened to go awry.

After texting questions about the line-up I get a message from Derek, one of  the co-founders of Nyege Nyege records, who is already onsite.

I promptly go out and buy myself a waterproof jacket and some crocs.

Kampala has established itself over the last decade as a city producing some of the most exciting dance music on the planet. Nyege Nyege Tapes was set up by Derek Debru and Arlen Dilsizian to not just give voice to eclectic and diverse electronic artists from across East and Central Africa, but to create a platform for them to travel the world and play shows. For many of them, they are doing so for the first time. In 2015, the Nyege Nyege festival was born, showcasing these artists on a bigger stage than the local club scene can offer. It became a hedonistic carnival dedicated to oblivion.

I travel from Kampala to the festival with Uganda’s answer to Michel Chion: Don Zilla. A man who veers from mystical Jah energy to something much darker and weirder. As we cross all manner of creatures and luminous green foliage he tells me, “You are passing through the cradle of civilisation. It is here it all began. Not Ethiopia bro, but here.”

I keep seeing things in flashes: serpents scrabbling or faces changing. “Is this normal?” I ask, swallowing hard. Zilla just laughs. “There are many spirits here - tune in.”

The electric morphing simply becomes part of the landscape and I just go with it, melting into the car seat as children wave slowly at me through the window. I wave back like a ghost tripping along the bumpy road to Jinja, 40 miles east of Kampala.

We have to jettison the car half a mile from the entrance as the road is jammed with trucks. It is as if we have arrived at the border of a failed state.

A festival is taking place, but outside the fortress walls. Strange monotonal versions of Happy Birthday ring out from boda bikes (a kind of motorcycle taxi) as ducks and chickens jump in mine and Zilla’s path. Young men sell sunglasses, beers and fruit. A lady grilling chicken calls out, “Hey, leave it in the past. You cannot take that into your future.” The smoke rises and we sink deeper and deeper into the mud. As we reach the entrance there is 1970s airport security and a large disclosure warning of the consequences of partaking in ‘drugs, sex orgies, nudity, open sex, rude gestures and offensive language’…underneath my feet, cockroaches in slick mud squirm in the opposite direction of thumping bass emanating through the forest. SLIK-SLIK-SLIK they go.

It is Day 1 and to say the site isn’t ready is an understatement. There were questions in parliament leading up to the event in the last week calling for its ban, where it was stated that the festival  “may compromise national integrity and put Ugandan citizens at risk of deviant sexual behaviour”. It was the kind of scandal that easily sells 12 thousand festival tickets but also slows down its preparation - that and the rain that is looming again in black clouds above the abnormal power of Itanda falls. It is here that this event is taking place on the banks of the River Nile.

I witnessed a festival being built around the crowd. The sound of hammers knocking against wood rings out everywhere. I have yet to find toilets or showers. Accommodation has not been built for those who paid for it, and there is a shortage of tents for artists and press. The feeling is that everyone must fend for themselves but there is also the music to contend with - some of over 300 acts set to play on an expanse of 45 acres on around six stages.

Hidden away on the edge of the forest is the tiny Dark Star stage that has bark cloth hung all around it. It conjures up the skinned victims' remains found in a serial killer's den; perfect to watch Don Zilla play a DJ set that pumps like daggers through the audience at hypersonic speed. A multi-headed Japanese crew appear from nowhere, jerking wildly, their faces multiplying - Zilla’s Jungle Breakcore selection reaching disturbing levels as he raises his arms aloft like an evil priest, his eyes bleeding.

It’s powerful stuff on the most interesting stage of the weekend - where Kampala’s underground artists, having built Nyege’s reputation worldwide, play almost aside from the festival itself.

You can tell Ecko Bazz - Uganda’s handsome spitter of fierce Lugandan bars over swirling samples and mesmeric beats - is angry about something and his fury connects like a boxing combination. “MMASO MMASO!” he yells as if the place isn’t big enough for him; even when it’s a mistily infinite forest.

Some people end up in the hospital tonight. There is talk of robberies and serious violence that I will hear of in the morning. For now I zip my tent that I have wisely set next to the Otim Alpha family backstage. The gentle sound of the Kora they play makes my brain relax like a fist unclenching.

On Day 2 there are more machine guns than I have ever seen at one time and yet no sense of security. Has there been a festival coup? Two military guys stop me on my way to coffee. “What?” I ask. “You need to have fun here,” they say.

There is confusion as to what artists have turned up and what stage and time they are on. I wander out into the forest again away from the funfair energy and bump into DJ Travella, the rising star of the Singhelli scene. Together, we watch his Tanzanian compatriot DONGO on a plastic garden chair in front of the stage. He goes emotionlessly from deadpan rumba to hammering noise wildly on the keyboard across his lap. We peer into the bizarre world of an outsider artist, and that very few bear witness to it makes it all the more special. The magic of this festival begins to take its grip.Later that night on the main stage, De Schumann’s raw confidence makes the crowd wail. The Dutch act pushes the rhythms of ‘bubbling house’ made popular by the Afro-diaspora in the Netherlands back in the 80s. They flex hard with claps, beeps and rapid snares that connect in a very serious way.

I am bizarrely served at the bar by a G4S security guard and yet one in four people I have spoken to have lost their phones. Clutching an empty beer bottle by my side I stagger back to my tent. There are toilets now.

Day 3 is something else entirely. I’m covered in sacred and fertile orange earth and become part of it all. Like Martin Sheen when he goes to murder Marlon Brando in Apocalypse Now, I am empowered by the vibration and oneness of spirit as something grows in me that I cannot quell. I spend most of the day with Otim Alpha having given up on who and at what time they are playing.

When they finally take to the stage three hours late I am so blown away by this ex-boxer’s voice and spirit that I stand there weeping until a man hugs me, whispering that it’s going to be ok. There is so much love and life to this huge group and as they dance and bounce to Alpha’s electronic take on traditional Ugandan music, the moment becomes everything we could ever dream of. My eyeballs go from wide to white and back again, trembling in my head.

Later, DJ Jeff of Easten Uganda plays a whole set of high spirited songs about circumcision. He finishes with an earnest speech as he clambers over the crowd. “You must be old enough to remember, no pain killer and covered in cassava flour.” I’m left glad that I’ve already had mine done.

DJ Diaki ends my night and my festival because no one is going to top this chaos. He turns up dressed like a businessman because this is a man who means business. High intensity BPM may be a thing right now but no one does it like Diaki. He whips the crowd into such a trance that we become a wave. I myself infringe most of the rules on the Nyege disclaimer right there on the dance floor. It is literally bedlam as Diaki pounds a PC keyboard to create a noise you can only imagine would make sense with DMT goblins leaping into your chest. He is unbeatable. Unfortunately for him, he ends his set having lost his phone.