Tarkamt Plays for the Dead in 'Live at the Necropolis' 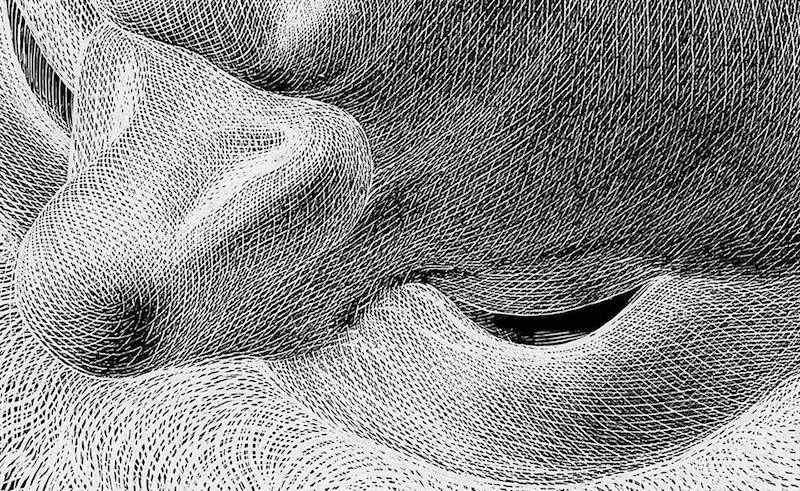 Those who live in a metropolis learn to understand that silence is a constant hum, or to simply do away with the idea of silence entirely, embracing aural chaos. Those sensitive to sound internalize the incessant soundtrack of the city around them, and either consciously or subconsciously process it. For musicians, it is not uncommon to take a city as a primary aesthetic inspiration, though the diversity of frequencies picked up by the artists may result in drastically different interpretations of it. In the case of guitarist and producer Cherif El-Masri, it is the dark, deranged and playful frequencies of Cairo that inform his mental urban landscape.
"The central inspiration was the immense sound of Cairo itself, paired with a long period of deep depression."
El-Masri is a member of The Invisible Hands with Alan Bishop, and also plays in Nadah El Shazly's live band. Tarkamt, however, is his solo project. "It all came together out of the necessity of self-sufficiency" El-Masri says, "an attempt to fully trust in my own creative impulses, without the safety net of a group setting to keep my ideas in check." This attempt has resulted in Live at the Necropolis, Tarkamt's brilliant debut full length that does have that feel of a piece that comes from a person's deep internal upheaval and creative reconstruction. Despite the name, this album is not a live recording, at least in the traditional sense - "the title refers to the fact that I mostly play for dead people."
Live at the Necropolis falls under the umbrella of harsh noise, with heavy elements of psych, no wave, and industrial. Though it is a noise album, it transitions from moments of desolate, dissonant and hopeless cacophony, to catchy, morbidly playful synth pop.
Though cliché to say an album sounds like "a journey," Live at the Necropolis' "underlying theme is a surreal and fragmented re-telling of the Greek myth of Orpheus, who upon the loss of his loved one, is compelled to defy the laws of life and death by traveling to the underworld and demanding that she be returned to the world of the living." This is what that sounds like.
The album opens with "Chrysalis," which tricks you into thinking it's ambient before brutally hacking that notion to pieces with something that sounds like Thurston Moore collaborating with a microwave to make black metal. It then launches into "Ebola Green," a rhythmic and discordant drum machine, synthesizer, laser beam trip that has you dancing, though you might be a bit uncomfortable that you are. That trip stops when you are dropped into a vat of, well, milk apparently, though "Churning The Ocean of Milk" makes you feel more like you have fallen into a pool of tormented spirits.
"Egyptians are drowning in a sea of strange noises as it is, but I'd happily play for anyone, anywhere."
Suddenly, the ritual drums and bells of "The Silo" place you in the jungle, in the center of a hallucinatory ritual led by the sinister vocals of Sammy Sayed, surrounded by menacing eyes that contemplate killing you. "Et Sic Infinitum" establishes itself with an '80s drum machine beat, topped with layers of synthesizers and electronic effects, and features a particularly rude guest: Alan Bishop on alto saxophone. This feeling stays consistent through "Outer Gateways," before dropping into what a uniquely standout track on the album.
"Death Takes a Vacation" features a vintage computer reciting dismal prose about death and DNA over a forlorn but undeniably catchy synth progression, punctuated by trebly guitar lines and punchy drums. Last, "The Harbinger" is a nine-minute aggressive psych rock opus, El-Masri's haunting vocals escorting you out of that strange, strange journey to the underworld.
When one learns about the recording process behind Live at the Necropolis, it makes sense that the album would turn out as unconventional and fascinating as it is. "Most of the foundational tracks and sequences were laid down on a portable multitrack recorder in various locations in the Western Desert, on primitive analog synthesizers," later mixed by Adham Zidan at The Pirate Ship, a studio "set up in a squalid hotel in downtown Cairo."
While it isn't really clear whether Orpheus gets his love back from the nether of existence, what is clear is that Live at the Necropolis is a captivating, nuanced and complex piece of work. It is a unique release to come out of Cairo, however it isn't entirely surprising that the ever-blossoming artistic scene of this throbbing city could blossom in such a deranged but beautiful direction.
Follow Tarkamt on Facebook, and buy 'Live at the Necropolis,'  available on tape & vinyl, via Bandcamp.
Previous Article