The bright, dynamic EP combines elements from dancehall, trap, R&B and even old school jazz to make for an early pathway into the summer.
by Farah Geninah 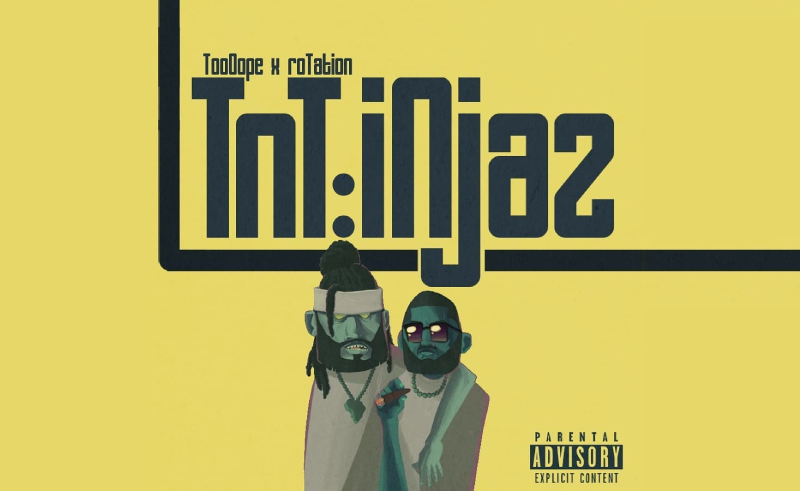 Khartoum-based rapper and co-founder of YoungJutus hip-hop initiative, TooDope, stands as one of the most popular rappers on the Sudanese hip-hop scene and has made a name for himself for speaking rawly and openly of the contemporary Sudanese experience.

Omdurman-based rapper and producer, roTation, also holds a unique position on the scene, and has been consistently praised for resisting whitewashed Western influences and experimenting with regional genres.  He’s also famous for rapping in Randaka - Sudanese term meaning flipping words to only be understood by a number of people.

Boasting a noticeable musical chemistry between the two artists, TnT: iNjaz – mixed and mastered by Sudanese producer MaMan -   kicks off with ‘Ejaza’, which attempts to represent the rappers’ generation, consistently paying homage to the strength and resilience of the people of Sudan. The track – like all others in the EP – combines English, Arabic and Pidgin English, and uses a beat that would feel right at home in a dancehall track. The melody also incorporates the kind of wind instrumentals associated with old school jazz, while lyrically, the track sheds light on individuals’ low key hustle that goes unnoticed. The music video's visuals are by Marrwan Elhussein.

The second track, ‘MaHanak’ (a Sudanese slang term on par with ‘no worries’), stays true to its name in content with the artists speaking of haters’ criticisms carrying no weight, and their obliviousness to the time and effort that goes into their work. ‘MaHanak’ – more punchy than ‘Ejaza’ – also leans towards dancehall, with hints of raggaeton, and could be seen as the perfect compliment to a lazy day by the beach.

‘Sytara’ sees the rappers take a more cemented stance that’s carried by an aggressive, afro-tinted beat, a catchy bassline and sharp, bouncy percussion, as well as the use of vocal samples. This track boasts a sense of community, and more than anything, endearingly mirrors how much the rappers seem to have enjoyed recording this EP. The rappers are here to make sure everyone knows who’s calling the shots (spoiler alert: it’s them).

Capping off the EP smoothly is ‘Ends’, which is consistent with the confident tone demonstrated in the previous track, and speaks more of lowkey hustle. The track thoughtfully incorporates the use of echoing vocals, which almost invites you to join.

Through bringing together various genres in its musical symbiosis, of regional and global sounds, the EP not only ticks off all of the right boxes in terms of what we’ve come to expect from the rappers’ creativity, but also radiates vibes of community, a refreshing nostalgia for a less constricting time and a much-welcomed light and airy aesthetic, which – these days – has proven to be hard to come by.