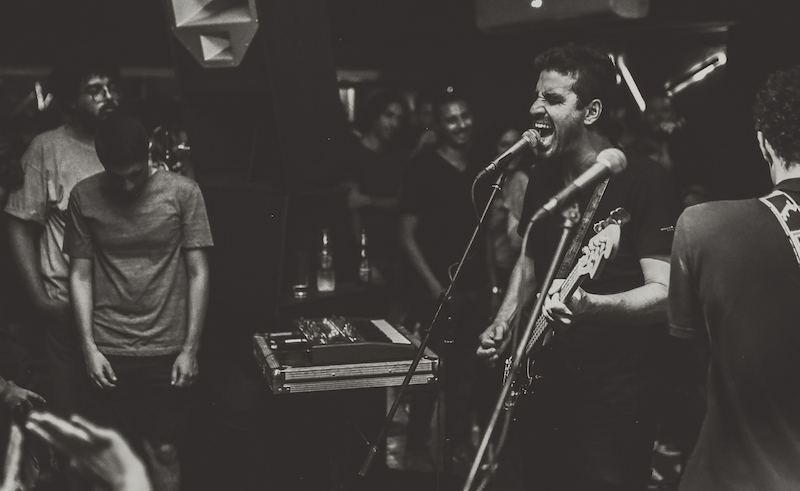 Cairo is not exactly known for its burgeoning punk scene, but what it lacks in quantity it makes up for in raw quality. KELAB are some of the ruffians keeping it real and delinquent.

A three-piece punk band from Cairo, KELAB is made up of members of some of the city’s other most edgy, thrilling bands: Youssef Abouzeid of PanSTARRS, Mahmoud Tawfik of Karset Nevin and May Mansour of SHOT. The trio draws influence from punk, shoegaze and electronic music, resulting in an off-kilter, unruly post-punk. They recently released their debut EP, titled El 7ayah El Gamda, a blaring and rude opus to good-hearted mayhem.

The EP exudes an evident teenage angst and almost comic level of pessimism with dismally titled tracks. Opener “World Day of Man” wastes no time with formalities, launching straight into a dissonant and propulsive track with a dirty, angular guitar line, unrelenting drums and laconic vocals.

It is followed by the dramatically titled “I Want to Die Now,” an even more aggressive assault than the previous track, with incessantly screeching guitar and sludgy bass. Halfway through, KELAB has us head banging with a stoner metal bass drop.

“The Dirty Truth” is a more straight forward, sexy garage punk banger. If Ian Curtis of Joy Division were to sing in Arabic, there is no doubt it would sound like this. The second half of the song slows down, and the vocals turn into more of a chant. This dynamic track is the highlight of the EP.

“There is No Future” as the name implies, is essentially a shouting match with the world. The guitar drones on a couple notes, as the vocalist dementedly repeats “hello, hello, hello” over and over, shouting “where are you?” and making freaky noises. Is the “you” he is searching for the future?

The final track, “Louli - Remastered” wraps up the EP with a no-holds barred, danceable punk jam propelled by serrated bass and screeching, pissed off guitar. The vocals are especially reminiscent of Interpol here, though rawer.

The name of the EP, El 7ayah El Gamda (The Awesome Life) is ironically at odds with the track titles, spelling out the somewhat tongue in cheek wry and sarcastic approach the band has to life and music; the essence of punk. It is easy to imagine this music as the soundtrack to some offensive carousing of a group of Cairene punks.

Zone+ & Usif: Electronic Duo from the Kingdom of Two Seas