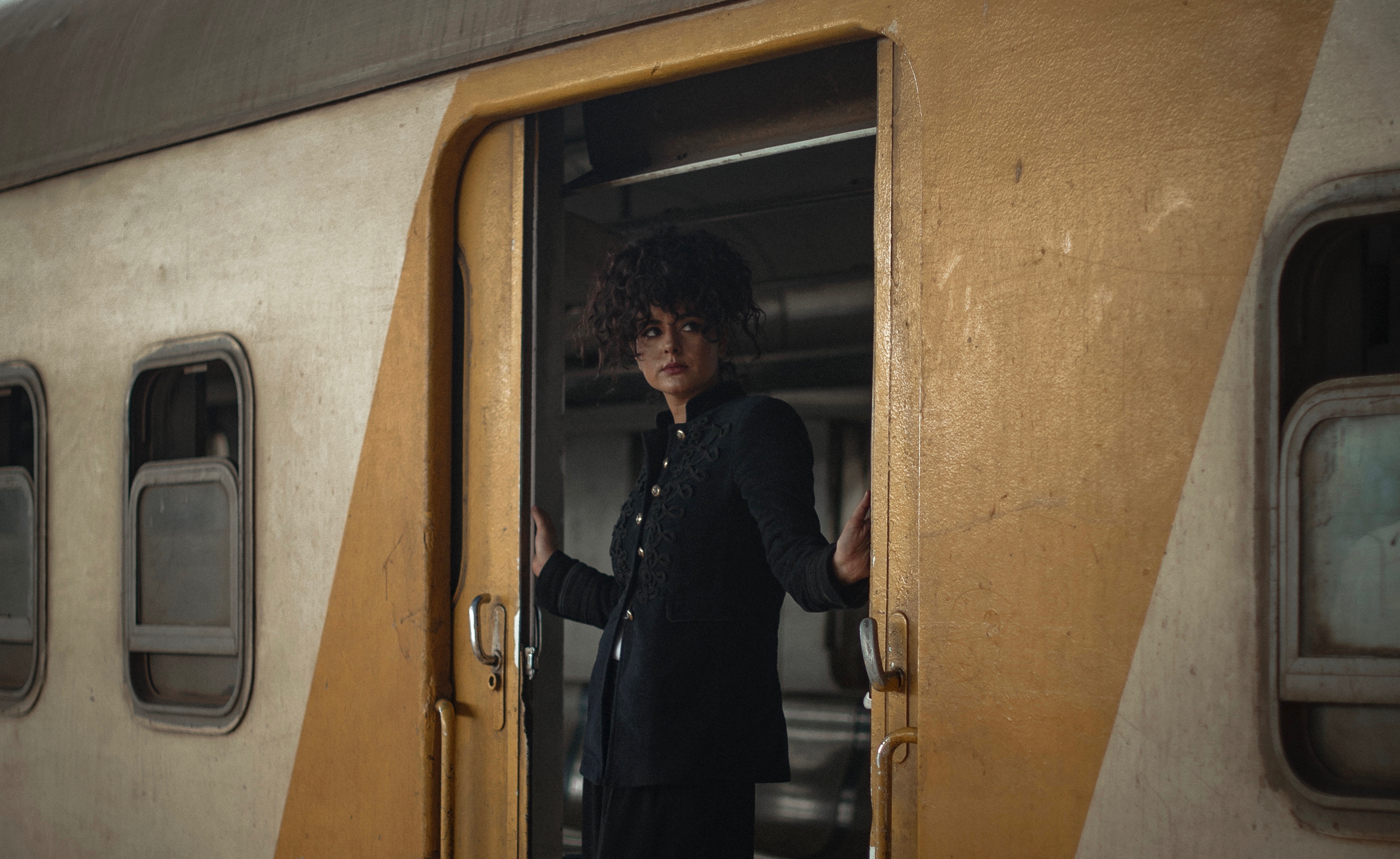 The dream begins slowly, with a meditative frequency drifting in like a plaintive train horn emerging from the darkness, accompanied by a few select notes, pulses of electricity in space that shoot straight to whatever vessel it is in us that holds empathy. This sonic atmosphere expands through a range of textures and elements, bird song and unnerving low-ends, the rattling of a cart on train tracks. Dina’s voice swims in over a bed of glitchy beats, a ghost riding an ominous swell of beautiful locomotive noise.

This is just the introduction to Slumber (Manam in Arabic), Egyptian singer-songwriter and producer Dina El Wedidi’s second album, and easily one of the most creative and important pieces of work to come out of the region this year. For those familiar with the Giza born icon, this album is a brash and invigorating departure from her first album Turning Back (2014), garnering her millions of fans in Egypt, and a growing reputation internationally. Somewhere after her time in the Nile Project, which she participated in from 2012-2015, and international tours in Europe, the Middle East, and the United States, Dina began reassessing herself creatively, turning down a very different track.

Like many artists of her generation that come from a more traditional band background, Dina found herself drawn to the solitude and liberation that comes with solo production, and she began immersing herself in this software. At the same time, a friend of hers was working on a website, archiving the sounds of Egypt’s railways. When he found out about Dina’s interest in production and sampling, he immediately asked her to join him in collecting these field recordings, and as they rode the train from Cairo to Alexandria, Dina’s life would take a very sharp turn.

Mulling over the samples later on, Dina was engrossed by their richness. She rode the train again, this time from Cairo to Luxor and Aswan, recording every sound she could: the rattling of the tracks, windows shaking, whistles, conductors yelling, the calls of people hawking goods, the whispers of passengers, birds at dawn – “there are a lot of weird horns. Usually you have one horn, and it’s almost the same, but in Egyptian trains, there are different sounding horns. When you hear the horn from the sleeping train, from inside it’s totally different from when you’re outside, and there are different codes the driver makes with the horn.” She threw them all into Ableton, and began an experiment that would consume her for the next few years, an experiment called Slumber.

She spent the first year without expectations, warping the sounds she sourced from the train’s ecosystem, and assembling a library. “The challenge for me was to see the train as an instrument” she says. “I only have this one thing, and I’m going to use it as my instrument. It takes a lot of time to develop it; to tune the train, to make all of the sounds out of it.” Indeed, no one would know that this entire album, asides from her voice obviously, is crafted 100% from the sounds of trains, and their surrounding ambience.

At the same time that Dina began her journey into the world of the train, she was fixated on the theme of time, observing the fluctuations in its movement and contemplating its meaning. The train’s entrance to her world was ­­­­­prodigious, proving to be the perfect vehicle for her to explore this concept. “I had this question of whether we are controlling time, or time is controlling us. At the same time, I discovered that the train is a symbol for this concept of time. It takes you from one time to another, and it takes you from your world to another world.” Within time, there are wormholes, elements that warp the “linearity” of it. One is travel. Another, and possibly the most powerful form, is sleep, and within sleep, this can intensify even more with dreaming. Inside a dream, you can live for hours or days, and wake to find mere minutes have passed. In Slumber, which she calls a “30-minute short nap,” Dina puts all of these elements together. “I think it’s called Slumber because when we’re sleeping, we are facing ourselves more. When you are dreaming, you are only with your mind. You go between conscious and unconscious, so you face it inside of a fantasy.” The album feels exactly like that, the psychedelic liminal plane that is accessed when you are between deep sleep and wakefulness, made even more disorienting by the element of travel.

Her decision to make the album inside this mindset was conscious; a deliberate metaphysical separation from the image that has defined her in the mind of her audience. “For me, I made the album inside of a dream, because I am very afraid – people have an image of me and my work, and I need to be free from all of these images. This is why I wanted to make this album when I’m asleep, not awake.” Though here Dina means that the album is set inside a dream, she also claims to have been in another realm throughout the entire process of making it. “I was so high from the train…It took me to a totally different world, and it took me a long time to return to the ground and handle my life again. That was happening while traveling from Egypt to Paris and Berlin, and the many places I had to cross to complete this album.”

The album takes place in this world – this nap on a train – and progresses through seven stations. The train stations, or tracks, are symbolic of different themes: love, limitation, fear, the time machine, anger and imagination. It begins with “Slumber”, a calm instrumental opening that introduces her experimentation with train sounds, before trailing into the second track. “The sky is raining,” Dina says about the song, “and I’m in the dream.”

“All I Need” is a gripping combination of aggressive darkness, rhythmic hypnosis, and emotive chords. Maybe it is my imagination, but I can almost feel the gritty tentacles of mahraganat somewhere deep inside, a genre Dina is very fond of, without it descending into any of the more dramatic elements, such as auto tune and wailing synthesizers, that have defined the genre.

“I have a headache and I don’t know what I should do except scream…there is a man around me selling water, and telling me ‘water, water, water’ but I’m screaming ‘Headache! Headache! Headache!’” This is how Dina describes “Headache”, her portrait of paralyzing fear that can send our minds into sickening inward spirals.  She questions herself in the song, musing on what a headache is, and going to Google for an answer about her symptoms, only to have it speak back to her “Dina, it’s fine.” The track is a sinister yet comedic exploration of anxiety and paranoia, with a chorus of pharmaceutical products to place it just as squarely in the man-made material world as it is in the world of delusion.

After this panic that is the climax of the album, the nap becomes more meditative and placid, though no less dark, coasting through a dark hallway that is “Homeland”, inhabited by distorted voices, before we arrive at “The Moon”, which Dina describes as her relationship with spirituality. Her voice drifts out of the shadows over a cascading, slinking rhythm of a broken train window and bells, solidifying into an engrossing chant. Rhythmically and vocally, it calls into light Dina’s background of traditional Egyptian folk music. The final track, “Alive,” was arranged by Cairo electronic artist Hussein Sherbini, who also supports Dina on vocals in the track. Musically, it is the warmest track on the album, zooming in on Dina’s looping lyrics that hop rhythmically from rhyme to rhyme, casting a hypnotic, disassociating spell, before the track drifts off, the train tracks lulling you gently out of the nap, and to your destination.

For Dina, making Slumber was at once tremendously taxing and revitalizing. Before releasing it, she was terrified about the reception, considering it has little in common with the music she has built her career on. Now that it is out, “I feel so relieved,” she says, “and I believe in this child. I don’t have to deny it – I feel much calmer.” It took her to Paris and Berlin, and into the hands of many mentors, who were fully supportive of her altered state of consciousness. In Berlin, she worked closely with German-American Ableton technician Brian Smith as co-producer, and in Cairo collaborated with Egyptian producer Hussein Sherbini as mixing engineer. Palestinian artist Kamilya Jubran acted as consultant on the album, and the album artwork is done by Jordanian designer Tawfiq Eldawi.

Slumber is not only a piece of art, in all senses, but a work of metaphysics. Dina’s act of creating a sonic blueprint of Egypt’s antique trains, which maintain their own stories of time, history, movement, and humanity, and warping them to forge the elements with which she paints her own mental landscape, borders on alchemy. The result is a voyage, best listened to in one sitting, that is haunting, disturbing, playful, comedic, and above all, magnificent. She has succeeded in using a machine to narrate the human experience.

Slumber is out now in Scandinavia and select parts of Europe on KKV Recordings, and will see its Egyptian release in January of 2019.