The Jordanian rapper’s collab filled debut album makes him all the more relatable. 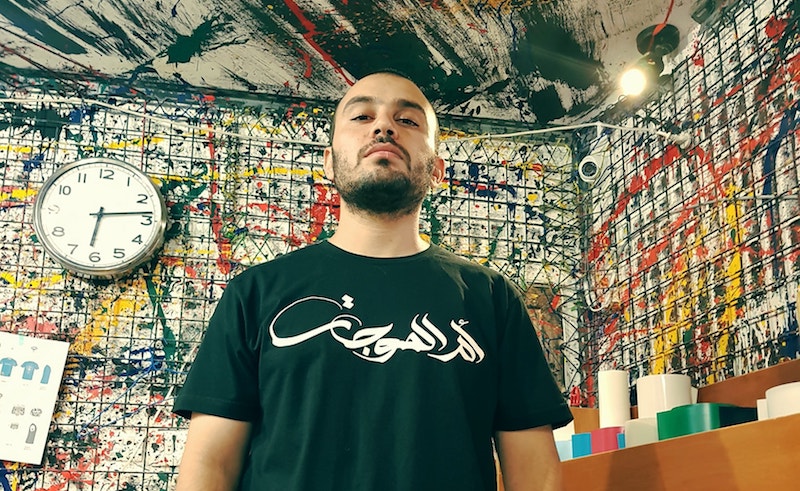 Om Al Mawjat - ام الموچات, literally translates to ‘mother of all waves’. I wondered if Synaptik intended this metaphor to represent sound waves or oceanic ones. While it may seem like a naive question to many, given the nautical reference in his artwork, the answer is actually the former. But in order to be entirely certain of that fact, we must first delve deep into his album, taking it apart and taking a closer look at its inconspicuous little elements.

Laith Hasan’s debut album released in late August has been a work in progress for two years. It features appearances from rappers Abyusif, ElRass, Bu Kolthoum, El Far3i, Mehrak, Wikidz and DAM member Tamer Nafar. Producers on the album are made up of Bader Azem (Wikidz) and Damar who crafted beats individually. Singer Yasmina Abunassar also makes an appearance on the LP.

The album starts out with the track الطوفان, literal translation: tsunami. A concept very fitting with the project’s title, owing to the fact that a tsunami is the ‘mother of all waves’. On this song Laith flexes his musical muscles, be it either by rapping or singing on Wikidz’s stripped down beat making for a provocative, catchy intro that prepares listeners to expect anything, sort of like the exterior packaging of a mystery product.

Speaking of packaging, the spectacular album artwork is designed by artists Inès Mhedhbi. Perhaps it would have been more effortless if the artwork featured just the giant wave or a depiction of a sound wave instead of simply placing Synaptik’s face dead in the middle of it all, as what seems like a desperate branding attempt. Now back to the album itself, it’s very wholesome musically. Even if it’s only soundtracked by two producers, there is almost no repetition in terms of style, making it a project clearly devoid of any form of laziness and pursued with complete passion. There is very little Arabic influence on this album, something I consider liberating, affirming that the regional rap scene no longer needs carry an Oriental element to be original. This concept is especially noticeable in tracks like “Tatti Watti” and “Kawakeb” featuring ElRass, both produced by Damar.

On the other hand the title track “Om Al Mawjat”, produced by Wikidz takes an entirely different direction, and serves as the core of the album. In this song Synaptik shares his innermost fears and struggles be it related to his own music or his career and set in the our modern-day society which still shows very little appreciation for hip hop. He also speaks about this concept that he’s stranded in the middle of the sea with no sense of direction and the only fact he still abides by is that there will always be a “new wave”. Wikidz definitely decided on the correct keys to make this track as emotional and moving as possible.

While every single track and stands out on its own, from his collaborations with Abyusif, Tamer Nafar, Mehrak, Bu Kolthoum and especially ElRass who pretty much stole the show. His collaboration with Yasmina Abunassar on the other hand while definitely successful, pales in comparison with one of his older songs with vocalist Yusor entitled “Sholi Jarali”. In the end the title track remains the standout song on the album.

In terms of collaborations, ElRass stole the show on “Kawkab” as previously mentioned and while Abyusif and Bu Kolthoum’s appearances are definitely impactful and enjoyable to listen, none of them have the ear-catching quality that “Kawkab” boasts.

All in all, Om Al Mawjat is a journey through Synaptik’s mind and an intimate conversation with the doctor (yes, he’s an actually practicing physician) who’s constantly torn apart between his talent and his career, fear and love, east and west while becoming more and more relatable to his audience every step of the way.