Constantly pushing the boundaries of her art, Felukah delivers an album full of rich musical ideas and bilingual one-liners. 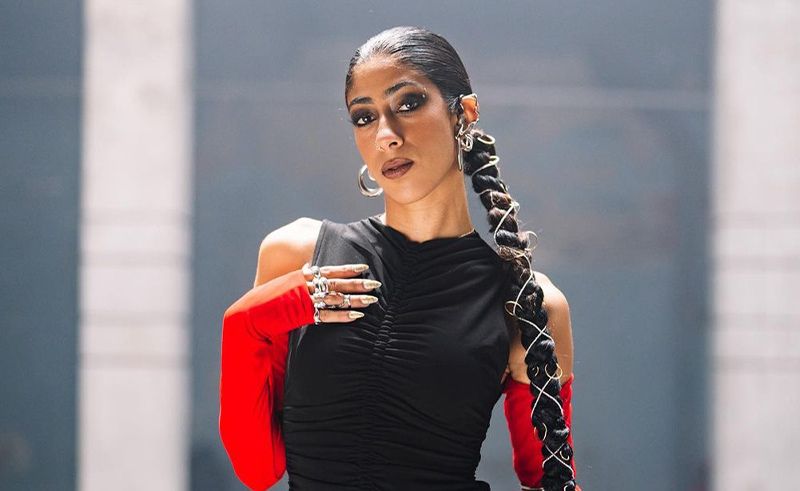 Based in New York City, Egyptian rapper Felukah has been providing a voice to a generation of listeners that resonate with her lyrical exploration of identity, culture, and language in a style that aligns with the upbringing and experiences of a multicultural youth.

Ever since Felukah began gaining notoriety in the Egyptian rap scene, the artist's bilingual delivery has been met with mixed responses. Blending Arabic and English in a style that reflects her own interpretation of the two languages, she uses both interchangeably - as so many of us do in our day to day conversations.

However, Felukah’s reaction to criticism has always been one of grace. Valuing her work it is clear that the artist isn't taken aback by the conflated arguments around her music, which often project a deeper dissatisfaction some may have with Egyptian rap music expanding to represent a more diverse listenership.

In her latest album ‘The Love Serum’, Felukah explores these themes through her heartfelt songwriting, and self-affirmations, as heard in the track Tawkidat (Interlude). This is a prime example of her unique take on mixing Arabic and western musical ideas in a style that is reminiscent of old-school hip-hop sampling.

The album kicks off with ‘Amira’s Intro’, where Felukah prefaces the body of work with a spoken-word introduction that veers into spiritual and philosophical topics. The instrumental provides a reassuring atmosphere full of soft-sounding synthesisers, dreamy woodwinds, and vivid sound design that establish the mystical themes that arise throughout the track list.

‘Neighbourhood’ then takes us into a familiar sonic space, with a chopped-up sample providing the main melodic idea of the track. The sampling techniques used here bring acts such as MF DOOM, and his frequent collaborator and producer Madlib to mind, by making edits to the sample that are obvious and rhythmic. As the drum beat kicks in, the track takes on its full shape with a deep-sounding bass-line, R&B-inspired vocals, and pensive melodic lines that see Felukah representing her close circle and “neighbourhood”.

The next track, ‘Lilymothersuperflower’, takes on a more neo-soul-inspired sonic palette decorated with piano flourishes and upbeat percussion ideas. Here, Felukah takes to her characteristic bilingual singing style to discuss themes of love and gratitude over the uplifting instrumental, where the relaxed pace of the track allows Felukah to explore more melodic ideas over a trap-inspired drum beat and a rich chord progression.

A reverse sample intro then takes us into ‘Baby Woke Up’, where deep 808s and an explosive trap beat see Felukah taking on a more aggressive delivery. In the track, she sings about moving on and “levelling up”, where the instrumental makes clever use of a video-game level-up sound effect to accent the line.

The album then veers into Arabic sonic aesthetics with a vintage oriental-sounding sample with the same technique as earlier. The sample is brought to life with bouncy 808s and classic trap elements. This track effectively encapsulates the musical themes of the album with Felukah bluntly wearing both her eastern and western influences on her sleeve.

Adding a darker sound to the track list, ’Say Hi To My Demons’ starts off with menacing laughter that capitalises on the eeriness of the intro. This is then contrasted with a fast-paced guitar melody and playful lead vocal line sung over a hard-hitting trap beat. On this track, Felukah shows off her vocal range by switching between her upper and lower registers in the electrifying choruses and stripped-down verses. For the only feature on this album, Moroccan rapper Dounia comes in with a rapid-fire verse that carries vocal affectations of emo rap and even pop-punk, adding a playful contrast to Felukah's voice and delivery. It should be said, however, that even as an advocate of Felukah’s bilingual writing style, the “spicy Shatta” line was a bit too spicy for my taste.

The track ‘Desert Woman’ then takes us to a more laid-back atmosphere, where we start off with a swelling, reversed melody gently playing on top of a jazz-inspired chord progression. Felukah then delivers a heavily auto-tuned vocal performance over the instrumental, in which she delicately explores a hazy melody that continually evolves throughout this track.

‘Sterlini’ then comes in full force, as Felukah takes on a more unapologetic and villainous delivery style, utilising trap drum programming in the instrumental that carries a jazzy undertone. This track carries my favourite Arabic verse on this album, as well as inventive flows, rhythmic ideas, and production techniques such as Felukah’s vocal doubling.

The album then gives the listener a moment of rest with the track ‘Tawkidat (Interlude)’, where Felukah delivers positive affirmations in a stream of consciousness, Arabic spoken-word manner over atmospheric ambient sonics.

Felukah ends the album on a theatrical note with the track ‘Give It All’, which starts with synth swells, an electric piano performance, and live drums that set this track apart as a heartfelt ballad. The lush instrumental is brought to life by ethereal strings, an emotional verse, and Felukah experimenting with her phrasing and timing, making this one of the highlights of the album.