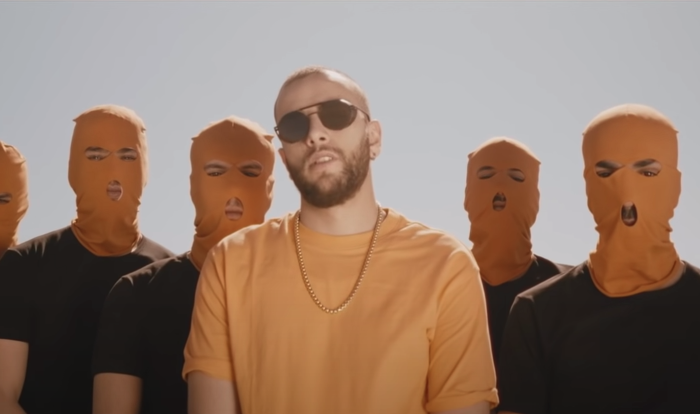 Our latest dive into the eclectic world of Moroccan trap music comes courtesy of viral sensation Draganov, who follows up his previous hit 'Yek Yek' with a new music video for 'Makelele'.

Shying away from overproduction, the beat for 'Makalele'  is incredibly minimal; a distorted, downpitched piano handles the entire melodic section, while massive 808 kicks and chainsaw-fast hi hats give the percussion a high energy bounce just begging to be bumped really loud during a slow cruise through city streets. Nouvo’s production is impeccably mixed, and the beat for 'Makalele' slaps even when played off a small phone speaker.

The video for 'Makalele' — directed by Maximum Markus, and filmed entirely on an iPhone —  is by far the most interesting part of the entire release. Featuring incredibly clean shots of an orange-clad Draganov surrounded by mob of intimidating (equally orange-clad) goons, we see the rapper driving donuts on a sandy desert plateau and flexing his lyrical proficiency.

In isolation, 'Makalele' ticks all the boxes for Draganov’s next hit, and is already climbing its way past 300,000 streams despite only being out online for a few days. That being said, to anyone with even a surface level awareness of global rap, 'Makalele' immediately stands out as a direct emulation of west-coast rap legend Kendrick Lamar’s 'Humble' off of his 2017 album Damn.

Draganov’s beat, flows, and even music video take heavy inspiration from Kendrick Lamar’s work, and whether this is merely a tribute/homage or not is unclear, but it does come across as an attempt to cash out on a tried and tested sound rather than really pushing boundaries.