After a busy summer performing around the globe, we talked to the musician that stole hearts mixing electronic music and kids toys last summer about her video that went viral and her diverse musical background.
by SceneNoise Team 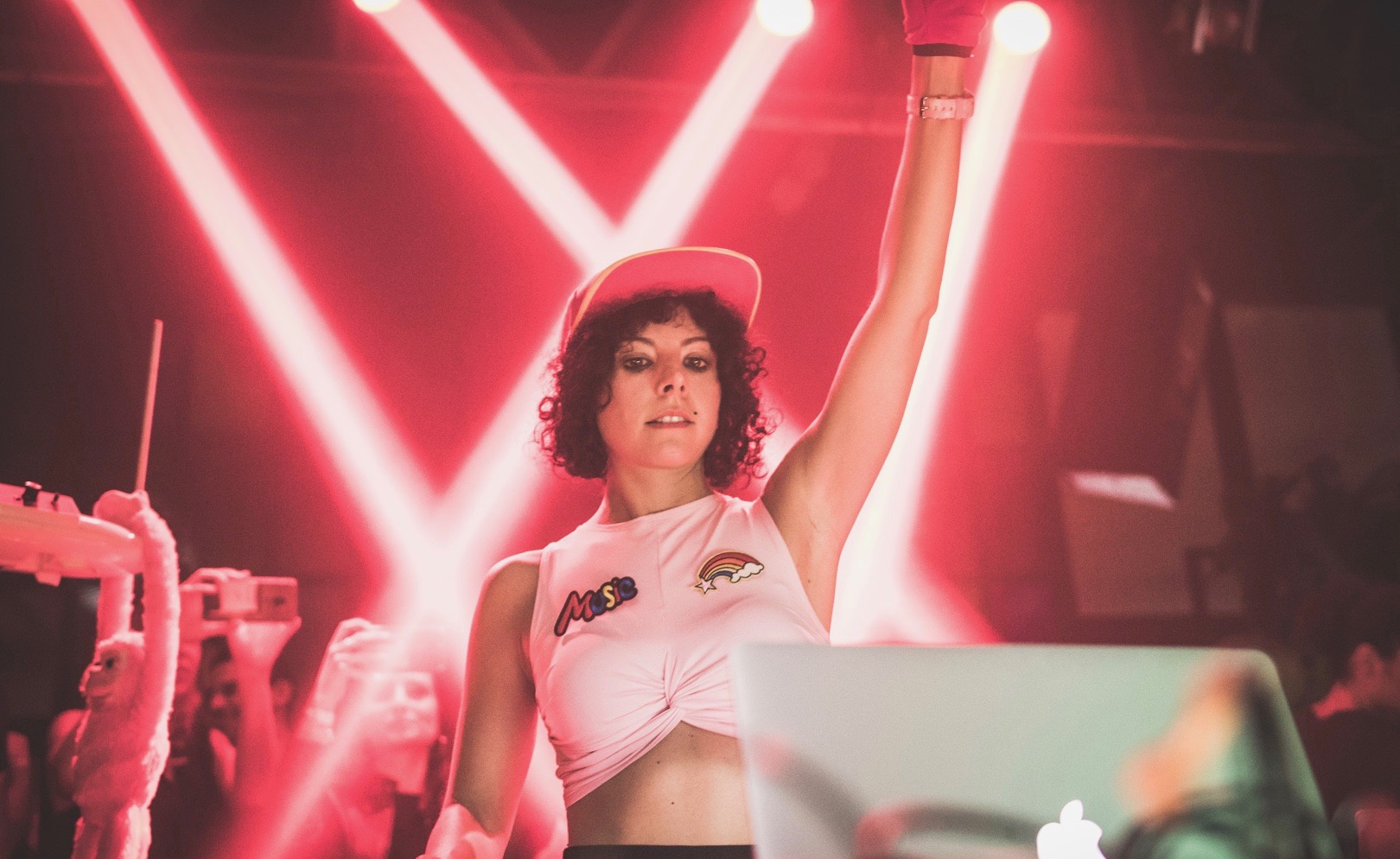 Italian composer Giorgia Angiuli is certainly not new to the electronic music club scene. She started experimenting with producing back in 2009 and started her first solo project back in 2013. Since then the Puglia-born artist has released on some of the biggest electronic labels known, including Stil vor Talent, Crosstown Rebels, Einmusika or Systematic and toured in the most popular venues all around the world. Still, 2017 marks a special year for the multi-instrumentalist. In an amateur video a friend took, she paired two of her passions: music and collecting kids toys. The shot of her performing 'Embrace Me Now' using some of her toy collection went viral and excited more than just fans of electronic music.

This year her first solo debut album In a Pink Bubble was released on Stil vor Talent. Pop meets techno meets house as well as Angiulis voice, a keyboard, a drum-pad, theremin and the popular toy instruments during her legendary live set-ups.

Hi Giorgia! Where are you now, and what are you up to?

Hey, I am actually answering you from Beirut, where I will be performing soon. Right now I just came back to my hotel room from a fantastic Lebanese meal and am enjoying some minutes for myself. I am really looking forward to my live gig in The Grand Factory and some more Lebanese treats of course - I really love the food here.

How was your summer this year? Can you tell us about anything interesting that happened?

My summer this year was really nice and I had the opportunity to play in many beautiful festivals and open-air venues all over the globe. For example I played at the legendary Fusion festival in Germany and the 100% Music presents Electronica Festival in Istanbul. I shared many beautiful moments this summer but for sure one of the most emotional events to play was in my hometown Puglia, in the South of Italy. I played just before Paul Kalkbrenner; it was super crowded and it’s just a whole other feeling to perform at “home”.

The video of you performing your track “Embrace Me Now” using kids toys went viral pretty quick. How did you come up with the idea?

I have to say that I was very surprised by the big support and love around the world I got for the video and it wasn’t planned at all. Actually I was just having fun in my room/studio. I have collected toys for many years now and to me it’s quite natural to make them part of my live set up. That day a friend of mine did a short video using his phone and we posted it online. The reactions were overwhelming and I then decided to put this track in as a free download as a gift and a thank you for my sweet new followers.

How far do you think you can push your setup in the future?

What I can reveal is that for my In A Pink Bubble tour, I will be working on a pink setup. Matching the name, all the gear will be pink. Other than that...be surprised.

A quote by Pablo Picasso states “All children are artists. The problem is how to remain an artist once he grows up”. Can you relate to that quote?

In my opinion children have a very pure almost pristine soul and communicate without filters. For me an artist should be able to describe their reality with a pure soul and a fresh attitude, full of creativity and instinct without following the rules of the market. Being sincere with yourself and staying true is what an artist should aim to do.

What kind of music did you grow up listening to?

My childhood and youth were shaped by a range of different tunes. From classical music to new metal to indie-pop to rock - I didn’t really settle for one genre.

You are strongly connected to music and are in fact a classically trained musician, composer and multi-instrumentalist. How did you then get into electronic music?

Yes, that’s true. I actually studied classical guitar and then I played all kinds of music from new metal to synth-pop electronic. I switched to techno music just a few years ago and I am really trying to keep all the influences from my past. I love so many different genres of music which makes it sometimes hard to define my style and I am never sure how my music will evolve in the future. When I was 18 I often went out with older friends, and thanks to them I discovered some fantastic music like Autechre, Apparat or Murcof. Also Kid A from Radiohead really fascinated me. Back then I was playing the electric guitar in a band and all of a sudden decided to start to buy some equipment to learn how to create these soundscapes. I bought Ableton first, then a sound card and step by step I bought my first synthesizers.

How do you feel about performing in Beirut’s The Grand Factory soon? And have you played in the region before?

I am more than happy to perform in Beirut and it’s actually my second time in this town. As I mentioned before I really enjoy it here and just love the mood of this country.

Do you have any future plans/upcoming releases?

For now I have just released my album In a Pink Bubble on German label Stil vor Talent.