Parisian premiere DJ/producer Djebali gives us insight on his career path, as well as what he loves and despises the most in the music scene.
by Ramez Mof 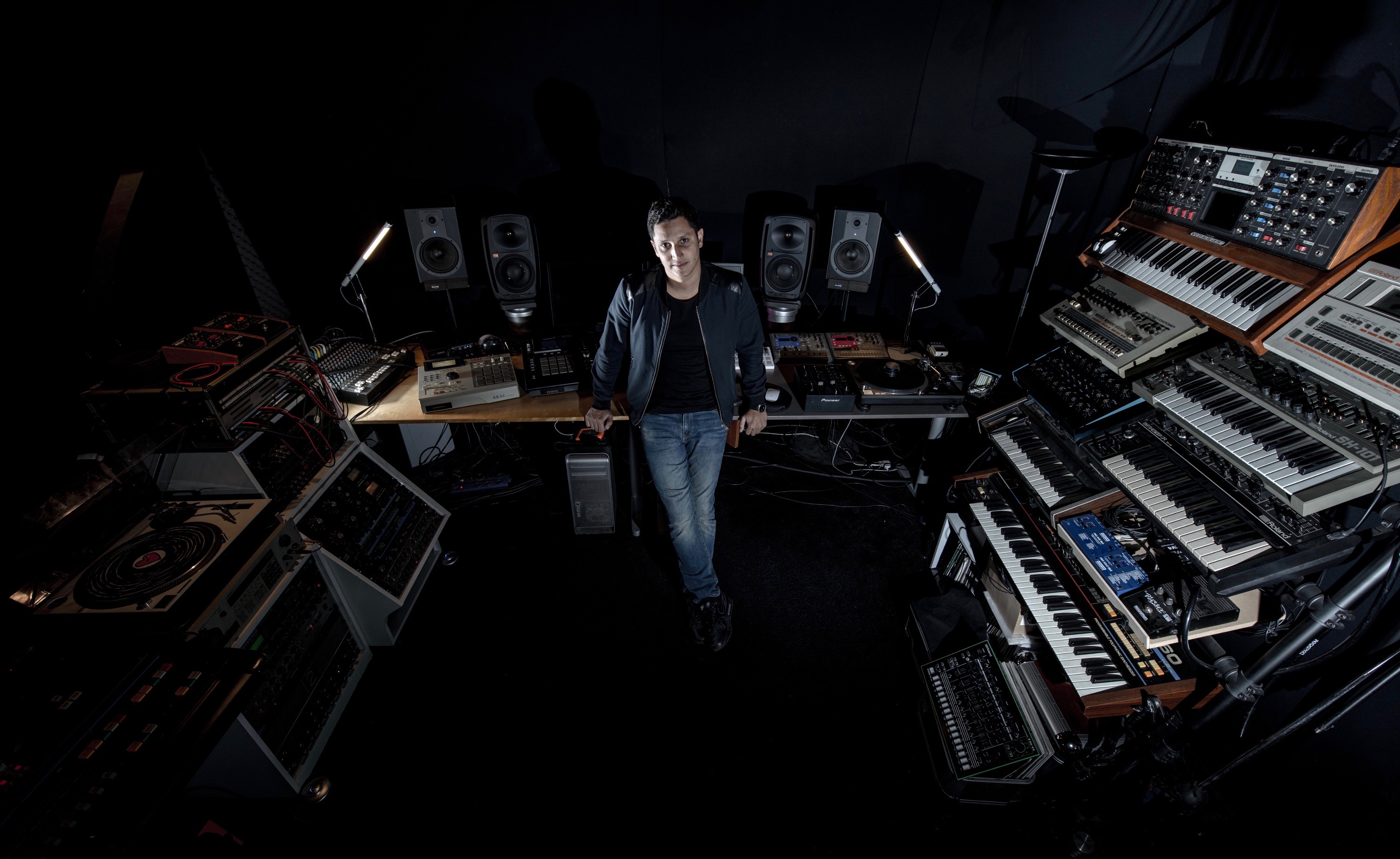 Mehdi Djebali grew up feeding his ears on tip top electronic music, taking the elder generations of Parisian DJs like Dan Ghenacia, Terrence :Terry:, Jef K, Cyril K, Dyed Soundorom and Shonky as his influences. Not long after, Djebali became one of the youngest leading DJs in the French capital, pioneering the micro-house movement, building a roster of talented musicians around him and making the sound gain popularity through his imprint, ( djebali ).

Micro-house is a very specific term often used to describe music built using the smallest sounding samples possible, layered together to build a sexy, deep groove, topped by soulful house music chord-stabs and hypnotic glitches. The sound emerged in the late 90’s to form the most ‘elegant’ forms of electronic music to date, taking the minimal approach in production and the groove of old school house.

We spoke to Djebali about the beginnings of his career and what let him to what he is today, only to discover that he’s the kind of musician who gives 200% into his passion - a man that has sold his soul to the beat.

How did you get into electronic music production? What’s your musical background?

I first came into DJing when I was around 15. Back then, I managed to buy my first pair of turntables and mixer and jumped into it. Production came later, around my 20s. At the time it was just for fun, using software called Reason. Eventually I got more and more into it and my first release came to life in 2007 on Jay Haze’s label, Tuning Spork.

I used to listen a lot of funk and soul music in my tender age, as well as French hip hop. By the way if you’re curious about here’s a mix below, [available online at Don’t lose the magic, Marcus Barnes’ blog] strictly filled with French rap favorites.

Your sound is very unique, what do you think sets you apart?

To be honest, I don’t know, really. I trust my ears and emotions. My sound has evolved a lot already, from my first releases on Freak n’Chic to ( djebali ) Series or more recently the Once A Month project, I launched early 2018. That said, I agree there is a common DNA, a “bind” between all these tracks I'm putting out.  I’d say this unique sound is probably due to the hardware I'm working with, and the way I'm mixing the tracks.. I do everything on my own.

By reading some of your interviews it looks to me like you are more than just a “bedroom producer” fiddling with a bunch of synthesizers. You have an advanced setup, a console, outboard effects, and everything is interconnected with a solid signal flow using a midi box and a patch-bay. Did you study or take any courses related to music technology or are you self taught?

I used to be a “bedroom producer” & I think loads of us get started this way. Then, as I was (and still am) passionate by the audio pro world, I looked for and found an audio engineering program. It doesn’t teach you how to produce, but to understand all the equipment and tools, you have to be able to record (instruments) and mix a track, under frequency and dynamics terms. I think that you don’t have to follow a class to succeed in producing, but personally it helped a lot in the understanding of how everything works and how the hardware should be used in the right way (console, Eq, Fx etc…)

Take us through your creative workflow.

One year ago, I bought a new sequencer called Cirklon. It changed my workflow. The MPC3000 used to be at the center controlling everything: Now it’s the Cirklon which does the job! Every synths and drum machine I gathered are directly connected to my console, an old Amek, and controlled by the Cirklon. It allows me to jam easily and find out ideas quickly. My patch bay allows me to make crazy routing through all my external FX and compressors. When I got the main idea, I start recording every element in Protools. And then I make the arrangement in the box and use the patch bay to add more FX or mixing modules. Afterwards I do the mixdown back on the Amek.

You have a very steady and consistent release schedule, how do you manage to still produce music while on the road? Especially that digging for music also takes a lot of time…

On point! That’s the hard part! Producing and digging take lot of time, so when I'm on the road, it gets complicated.

So the idea is to record a maximum of leads while I'm in the studio, which I can arrange and edit on the road through Protools. This way, I can finalise the project straight back in the studio. Sometimes I travel with my MPC2000XL which is smaller than the 3000 but still too big to have it with you 7/7. The next step I’d like to reach would be to record the two tracks directly on the console while I'm jamming, to make the edit “live”, save time on projects and be able to focus on other themes when I’m on the road.

Who is the DJ that inspires you the most?

Ricardo Villalobos! A DJ who never stops touring, but releases a lot of music! He built up a perfect workflow that allows him to optimize every minute passed in his studio. Regarding DJing, a lot of people have inspired me, and will keep on inspiring me. For me, the level of DJing has increased a lot those past 5 years. I constantly meet very talented DJs, already known or not!

What are the criteria for a track to be released on your label?

I focus mainly on the vibe of the track, but there is one rule that’s never changed… it has to be groovy! If my hips move while I'm listening to the demo, it’s a win! There are many artists on my label, all with different touches. Kokaz is completely different from Chris Stussy or from Jonny N’Travis or even from the new release by NTFO (for whom I did a remix by the way) but they all have one thing in common:  a lot of grooves!

What do you advise young producers who want to make it in the music business?

It seems basic, but to believe in yourself. One of the first things I learned is to trust your ears. It's not about having the same sound of this guy or that guy, but more to make it personal. If it sounds good to you, if it’s the result you’re looking for, that’s it! Period.

My second piece of advice for young producers would be to connect with others producers, whatever their age. In a way, that’s what I'm trying to do when an artist releases on my sublabel ( djebali ) Present - the platform I've dedicated to newcomers. Once his original track is out, he will have to make the remix of the original from the following EP. This way, I create connections between them and I truly believe that we are stronger together. Networking in music is as much important as other activities.

What are the things you discovered yourself that you wish someone told you in the very beginning of your career?

I had the chance to be welcomed into a music family really early in my career. Guys like Dan Ghenacia and Terence :terry: gave me a lot of great advice when I was still a beginner, something like around the age of 17. I haven’t been so much “surprised” in my career. Maybe the fact that a career in music requires all of your time, so it’s not a problem when you’re devoted to it. But it's something I think you should realise before plunging into it!

What’s the thing that you despise most in the music scene? What do you do to change it?

That “network” thing. It would have been great to be able to play every club just thanks to your talent. There are thousands of geniuses out there, DJs or producers, but they may never succeed because they're in a wrong or nonexistent network. It's a shame, but I guess this is not happening only in the music industry, it’s just how things are. If I had the solution, I'd be glad to share it with you - but unfortunately, I don’t! That’s why I'm trying to give back by backing artists with (djebali) Present, or by giving advice to young DJs and producers I meet on the road.

Hopefully I shall do more one day!

Have you ever visited the Middle East or played a gig here?

I had the chance to play Lebanon several times, as well as in Dubai! I loved it. I wish I could take more time to visit the area sometimes,  especially as I have a lot of friends around there. But I have so many countries, and even more cities, still to discover. For example, I have heard a lot of good things about the scene growing in Egypt!