V.I.V. is a small collective and record label pushing the experimental electronic scene in Morocco. 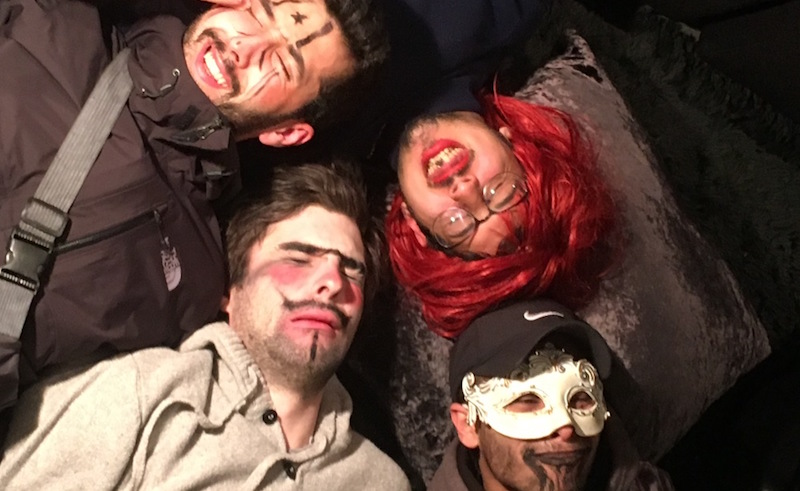 Through the ages, Morocco has been a psych destination of sorts for tripped out foreigners, artists, musicians, and writers, drawn to the North African country’s inherently psychedelic cultures. There is an urban legend in Morocco, that in the late ‘90s, European psy-trancers came to the deserts of Morocco and threw free raves. A local population, at the time ignorant to DJing, was dumbfounded by the “drugs, barely-dressed women and intense music.” Little by little, they tested the waters; a little dancing...some drugs. When the Europeans stopped coming, the Moroccans found they couldn’t continue as before, and thus the DJing and drug imports landed on their shoulders. The Moroccan electronic music scene was born.

Fast forward more than a decade. A few years ago, four young Moroccans met and instantly bonded over their common obsession with music, for which they shared similar tastes. After DJing together, they thought “let's go all the way and produce our own shit.” Independently, they had all been hovering over the idea of being in a collective, or starting a label, and this seemed a natural next step; all they needed was motivation. After a few years of letting the idea simmer and summoning the momentum, V.I.V. Collective was born.

In this 21st century world, which becomes brutally more 21st century every day, “collectives” seem to be popping up like mushrooms in a pasture, quickly becoming a popular model for millennial artists to introduce a sense of structure and perhaps entrepreneurship to their creative endeavors. Ganging up to produce, support, lend one another talents, spread awareness via a multitude of platforms, and a dash of some “who knows, let’s see where it goes” – I’m positive this conversation is being had at this exact moment, somewhere near you. Apart from placing an intimate community behind creation, what is the main motivation for becoming a collective?

“Destroy the planet.” That would be the primary objective of V.I.V. In the meantime, they would like to promote alternative and experimental sounds in Morocco, and develop the music scene: “unite it, diversify it and consolidate it.” They strive to show that “in this third-world country things are happening,” to bring truly creative and underground music to a culture that isn’t quite acquainted with such sounds. “There are so many talented people here that don’t really have a way to promote and bring their music to an international audience, so with V.I.V. we’re also trying to do that.”

“Music is everywhere in Morocco, but you can’t really make a living of it except if you own a club or you sing in cabarets. But we’re trying to bypass that.”

In true millennial fashion, the members of V.I.V. don’t live in the same place; they are scattered across four different cities in Morocco and France, and thus the backbone of their collective is the internet. Anyone working in a small creative organization knows that roles blend, and the motto inevitably becomes “all hands-on deck.” As four people, this is certainly the case with V.I.V., though Rayane managed to narrow it down a bit for us: “in short, Hamza is the A.D., Simoh is the words and planning, Simo does the P.R. and I take care of the technical stuff like mixing.” Though the internet has in many ways managed to kidnap what we used to call reality, this will never fully be the case. “That’s one problem we have, not being able to get together as much as we want, not only as a collective, but also as best friends, but we manage this situation pretty well, physical separation is not really that big of a deal anymore so we talk on the phone and on the computorzzz,” Simo explains.

You could call the timing of V.I.V.’s inception to be appropriate. “For me the timing wasn’t a coincidence. The scene has been buzzing these days and there are lots of things that we’re doing now that wouldn’t have worked a few years before,” says Simoh. They credit Morocco’s new readiness to accept artistic change to two main things: festivals and the internet. After the first Oasis festival in 2015, the doors of DJing and electronic music were blasted open for the North African country. “DJing is more accepted and foreigners are getting more interested in what’s happening here,” Simoh continues. That said, though festivals helped the scene evolve, they didn’t create it – this was due to the struggle of local promoters and DJs – and there is still a long way to go. “There are a lot of parties happening but it’s mainly cheesy tech-house or cheesier techno sounds, the stuff you hear everywhere at any time now,” says Simo, before casually reiterating the simple but potent value that drives V.I.V.: “at one point you need to evolve and bring new things, otherwise everything becomes just a copy of the other and it gets pretty boring.”

The material that V.I.V. is putting out is far from boring: experimental, IDM, glitch to name a few. Aside from the three members of the collective that produce music, they are also acting as a platform, a label you could say, to release the music of other Moroccan artists. Late last year, they teamed up with London outfit The Intergalactic Republic of Kongo (I.R.O.K.), whose front man Mike Title is half Moroccan, to release a “psychotropic Saharan rave banger” EP titled Ich Will Nach Hause Gehen (I Want To Go Home).

Today, we have the privilege of premiering an EP by V.I.V.'s own Simo, aka Sumo Hamed. On The Fish Ran Gold is “an IDM-flavored collection of sweet sounds and precise drumming,” that manages to remain accessible and light while exploring the complexities of Simo's favored genre.

Though they are currently focused on Morocco, V.I.V. don’t plan to stay within the lines. “V.I.V. is all about going beyond borders, artistically and literally, so we’re definitely working on creating bonds with artists outside of Morocco. I’d love to work with Algeria in particular as I’m a lovechild of both countries, which stupidly have been in a shitty relationship for too long,” says Rayane.

They choose to approach their musical scope with similar openness. At the moment they are focused on alternative and experimental electronic music, though they are interested in releasing anything that is good, relevant and honest. Warp records, based in London, is a reference for the collective when it comes to incorporating different genres. This makes sense, considering the crew’s musical tastes range far and wide, though they are united by a love for experimentation. “I know some people say ‘I listen to everything’ and they only mean EDM, rap and rock but I really listen to everything…which makes it hard for me to produce because I can’t settle on a single style. These days I’m really into glitch,” Simoh elaborates.

When it comes to taking inspiration from Morocco itself, they choose to forego incorporating Moroccan folk music into their music, which Simoh sees as a cop-out. “I think it’s lazy to use this as a source of inspiration because it’s the first thing that everyone does and it doesn’t always sound good or more developed than ‘oh yeah let’s put a darbouka loop here.’ Our Moroccan inspiration goes beyond that, we’re inspired by our experience here, the cultural limitations of the country and the ‘real’ Morocco, not the one seen in postcards.” Their approach is more in capturing the aesthetic and levels of sentiment that live in the liminal creases of the cultured and hallucinatory nation. Though perhaps not glaringly obvious, Morocco is inextricable from their music; the NACHID // FORWARD EP is a reinterpretation of the Moroccan anthem by Moroccan artists.

“The bigger objective would be to develop the scene in Morocco further than just doing parties: unite it, diversify it and consolidate.”

Producers, label bosses…party planners? “Not yet but we’re working on it” says Simo, “we want it to be different and really game changing, not the usual DJ booth party thing. We want to bring as many V.I.V. artists as possible and show all the genres we like.” In Morocco, they explain, the party demographic consists of the young and rich, and "not enough girls." Hopefully V.I.V. can change that; they have event prospects on the near horizon, specifically a noise performance by V.I.V. artist Post-Mortem Architect. At the Dutchculture Center in Amsterdam, V.I.V. hosted a listening session of a compilation of musical reinterpretations of a forgotten Moroccan movie by Ahmed Bouanani, which they hope to do a cassette tape release party of. “We focus on the same goals and we all agree on where we want to go with V.I.V. in the future and the different sub-divisions we want to create in the future. We really want V.I.V. to be a full experience, not only stimulated through sound,” states Simo.

Though Morocco has a way to go in its establishment of a thriving experimental and party scene, the collective sees the country in a very healthy place, with two big electronic festivals with diverse and quality bookings, a number of parties, and growing foreign interest. “Every foreigner I know tells me that we’re at the same state that they were in 15 years ago, in a good way. So…if we keep this rhythm—and if the fad doesn’t wash away—we’ll have an autonomous scene in a few years,” Simoh weighs in. He continues, voicing a sentiment that is universal across the MENA region: in order for it to thrive, the scene needs a sound system culture, more venues, legitimate promoters, vinyl pressing plants, a real media source to cover music, and more producers…“but also immaterial things like crews accepting to work together, unity, a bigger crowd and the concept of paying for music…but we’re patient and dedicated to developing the scene!”

V.I.V. would like to thank their coach, the main source of their inspiration: “Thanks coach!”

Fractal Are Closing Their Season With Pender Street Steppers