Raised between Cairo and Minneapolis, Prince Tut forges his own narrative on his debut. 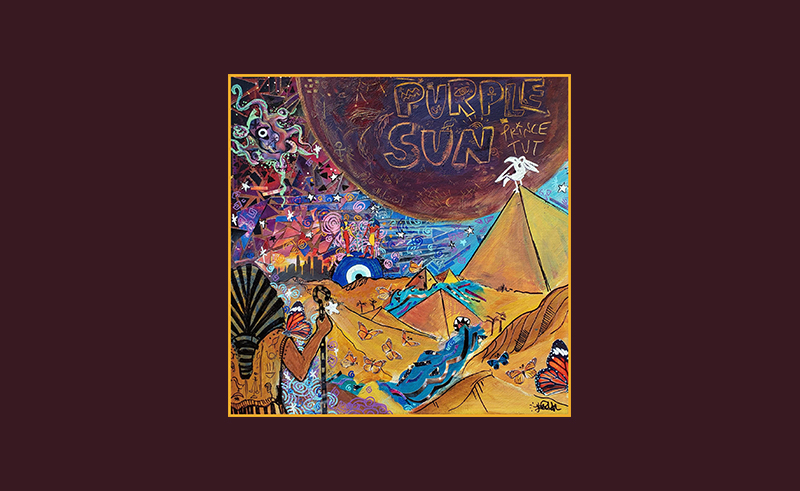 Growing up between two ends of the cultural and geographical spectrum, Nader Helmy aka Prince Tut represents a voice that perhaps doesn't get heard enough in the general hip hop meta, a voice that was merely born in a place, only to live its life in another, a voice of an Arab by birth but American by his eventual cultural, educational and residential experience in the US, albeit occasional summer break visits to your home country.

By his own account, he was never ‘surprised’ by how his art commonly treads ideas of diaspora, belonging and the concept of 'home', or at least what remains of this jumbled rhetoric. We got to speak to the Minnesota-based self-dubbed Prince Tut as we review his recently released, promisingly unabashed debut album Purple Sun.

"I was born in Cairo in 1995 but moved to the United States by the age of three, where thereon after, we would come back to Egypt for 3 months every year during summer break.” The young rapper told us. "I grew up straddling what I saw as two separate but equally important lives; my family and my culture in Egypt, and my friends and hopes in the U.S. I would spend summers swimming in the Red Sea, and winters shoveling snow and studying for my exams in Minnesota." Ali added, further on saying his initial inclination towards music was mostly as a mean to express such polarized experiences, an inclination he got to discover in his early college years through rapping, slam poetry and exploring and using words as a catharsis for his innermost thoughts.

"It started by free-styling on a radio show in Philadelphia that I hosted with my best friend. Shortly after, I started writing my raps down, performing little live shows on campus and competing in Battle of the Bands. It wasn't till I left college that I decided to put an album together.” Resolute, he set up a small studio and got to work, giving us his impressive debut album that is Purple Sun.

Waking up from a deep slumber only to dive into another one, Purple Sun's tone is immediately set as it opens up with the drug-laced 'Teaser', a track that seemingly depicts scattered frames of the young rapper's life as he tries to make light of the scene in store, as he puts it, where he hops up on dreams, only to immediately lose them, a scene that's stacked up on the free love movement and its hippie drugs equally.  "We leave earth in the night, we go to space to see the stars, rocks on the moon are a reflection of us. " a contemplative, heavy-minded Prince Tut raps in metaphors as 'Teaser' sees its exit.

Purple Sun, thematically as an album, tackles various topics that seem to be a reflection of Prince Tut's life — In 'Mummies', Helmy takes reference of his Egyptian heritage where in the song's hook, he talks of modern society's obsession with monetary wealth. "Let's get money encased. Tomb, with the mummies I lay." Helmy repeatedly raps, simultaneously questioning the notion and weight of money in light of the after life. 'Fit in my Skin' opens up with the line "That's my little melanin, highly compelling." where from the get-go, the song immediately celebrates both his race and color, but also equally tackles them in context to the America of today. These ideas are further amplified throughout 'Fit in my Skin' where Prince Tut spits out bars, rapping "I'm gonna' make it to the Oscars, say "Hey! what's up Lupita. How you doin', why we need this?" in turn, questioning why people of color still need that level of validation in today's world.

Legacy and continuum are also themes that are mirrored in Purple Sun, themes that Prince Tut talked to us about when we got to ask him if fellow Minnesota-native and musical legend Prince had any influence over his album or his music growing up. "The name Prince Tut is partially an homage to Prince, and partially a reference to my ancient Egyptian heritage.” Helmy said, adding that the namesake was a way to carry on the legacy of Prince who was also a "weird, creative brown kid" like himself, who grew up in similar circumstances in the white suburbs of Minnesota. "Around the time that Prince died was the same time I was starting to get serious about my own art and releasing music. The outpouring of support around his death was a huge motivation for me in thinking about the legacy I want to leave. " Prince Tut told us uncompromisingly.

Such themes, in addition to the concept of power, are treaded in Purple Sun's lyrically and musically ominous 'Desert'. "Body like a vessel, teaching it lessons, what am I gonna teach it, I am no teacher, follow that leader, wiki that leak-a, turn up those speakers." Prince Tut raps in a rather enigmatic verse, equally touching upon spirituality and questioning the ideals of power. "Coming for the king like a peaceful recall. Never kissed the ring, does he want a free fall? " Helmy continues " I want respect like Aretha, spell it out. Judas want me dead like I'm Jesus, wear a crown." Prince Tut rapidly raps over fuzzy, cryptic beats "Chill with the legacy you've been given. Everything you draw strength from, and winning " Helmy revisits the notions of extracting inner power from your innate legacy and ancestry. "It's been like forever, I wish I would remember, memories from home, it’s just in desert, just in desert. " Prince Tut sings rather ambiguously in a somber, lonesome tone as ‘Desert’ sees its end.

Lyrically, 'Desert' seems to follow the same tracks as a lot of the songs on Purple Sun where there seems to be an overarching theme that's intertwined with Prince Tut's ideals, inner thoughts, dark impulses and fears, and with that Purple Sun sees a unique sense of lyrical transparency, strong flow and thematically worthwhile tracks - offering an experience that hip hop and rap does not get to witness often.