Take a look at some of the stand-out visual representations of Middle Eastern music. 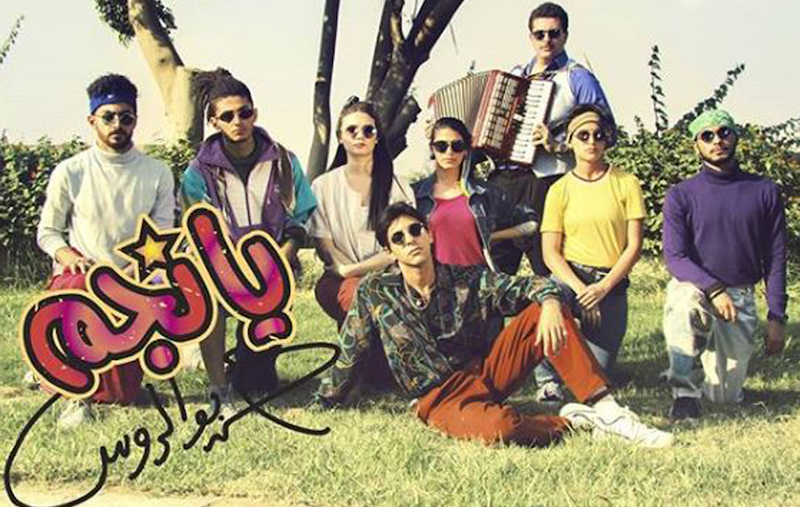 Music videos are an art to themselves, and give a new weight and meaning to a song. We have selected 13 must see music videos by Middle Eastern musicians that came out this year.

"Trap Beldi" is the latest work of Moroccan rapper Issam Harris. The video succeeds in utilizing Moroccan nostalgia through incorporating aesthetic elements like the Motobécane, a moped bike that's heavily used in local areas like Derb ElSultan in Casablanca. The colorful tracksuits also reference the early '90s, a period when rap started surfacing in the Maghreb countries. The track is produced by Adam K, marking the second collaboration between both artists. This isn't ISSAM's first vintage-styled video, he also released a video with a similar theme in August for his track "Bonne Année". The track flirts with the idea of independence from American rap, a product that's purely Moroccan.

Hassan Abouelrouss - "Ya negm, ya star"

"You're handsome, you're a legend, you don't even need a diet, keep up the good shape - you are a legendary dragon" - these lyrics are dedicated to Egyptian soccer hero Mo Salah. In the '90s style music video, Cairo-born Abouelrouss, more a comic than a singer, pays tribute to Egypt's king of hearts. An iconic music video paired with witty lyrics and a catchy beat make for a fun watch, the video appeared out of nowhere just ahead of the Egyptian national teams second World Cup game against Russia earlier this year. The hymn wasn't enough to make the team succeed but is still a must watch for everyone who cherishes Mo Salah (or will after watching this).

The music video of this collaboration between the Iraqi-Canadian rapper and our Lebanese all-time heroes from Mashrou' Leila is dedicated to the memory of Narcy's grandfather Jiddu Jamal Alsalman who passed away in Dubai in 2017. The tribute was directed by the hip hop artist himself and uses stunning views of nature that perfectly fit the calm and harmonic mood of the song. It was shot in Tripoli and Tannourine in Lebanon and even features a little sneak peak of Narcy's back then not released studio album SpaceTime.

This video is just like the Egyptian rapper himself: always on the move. In what seems to be one shot, the camera keeps it focus on Abyusif throughout the video and follows him teleporting from place to place in an urban Egyptian environment. Is this a nod to his unpredictable personalities and several aliases? Shot by Egyptian video director and music producer Wael Alaa, the visualization is a clever compliment to the lyrical direction of the track that comes with a handful of word games. A big extra for everyone who is not fluent in Arabic: there are English subtitles included, so everyone can get a grasp of Abyusif's lyrical genius.

The Acid Arab remix of "Café" was part of Hamdan's 2018 release of Al Jamilat Reprise, an album that came with remixes of songs of her previous album Al Jamilat from 2017. The video is a blast from the past, made from home videos: happy people dancing and making music in their homes with a major fashion throwback. Edited by Lebanese director Eli Jean Tahchi, screenwriter and experimental filmmaker, this video takes you on a journey into nostalgia.

"Rouge à lèvres" is French for"lipstick", which is in fact the dominant symbol used in this music video by Mehdi Bahmad. The lipstick here displays a key symbol for gender role liberation, which the video seeks to empower. The Moroccan-Canadian singer, who also directed the video, refers here to a generation where gender fluidity becomes more and more common.

The music video for "Beit" is a state of being, taking you into a journey of an overwhelming sense of emptiness and dreaminess. The visual approach shows Egyptian singer Zeyada in an old empty mansion, with an unplugged rotary, the TV stuck on static and a nearly dead plant. It perfectly supports the artist's angelic voice that creates a calm, dreamy - if not creepy - feeling of nostalgia.

The release of "Ehna Wahed" is dedicated to support Syrian refugees as part of "Give", a UNHCR campaign that aims to help Syrian families which were impacted by the war - a noble cause. The touching music video takes place in a refugee camp. It revolves around mysterious golden hands that reach out of the dark spaces of the camp to provide the young refugees with everything from sweets, to orange juice to winter hats - sometimes a little can be a lot given the conditions of these camps. The thoughtful music definitely supports the emotional yet calm vibes of the music video and transfers the message that "we are one".

"Folklor" is the first music video of the Alexandrian rapper, which he published on his 23rd birthday. Produced by ElDob ElBared, the shot follows Marwan around in various settings. First he is in the parking lot of a shopping center, before you find him chilling in a living room that is decorated with a copy of Picasso's 'The Weeping Woman' next to a poster of Travis Scott, finally strolling in a neighborhood of faux-mud houses. The verses are about him being a trendsetter in the Egyptian rap scene.

Music videos by Western artists shot in the Middle East is nothing new; just think of M.I.A.'s "Bad Girls" or French Montana's "Famous" that are both filmed in Morocco, the art project to "Believer" by Major Lazor that was filmed in Egypt, or the giant collaboration between Kanye West, Big Sean, Pusha T and 2 Chainz to "Mercy", set in Qatar. This time it's Dutch rapper Sevn Alias, who was born to Surinamese/Antillean parents and raised amongst Dutch-Moroccan youth, who made a trip to the Middle East for his music video to "Meg Het". Shot in the outskirts of Cairo and the 6th of October district, the video features extras ranging from a gang of old men in traditional jalabiyyas to a young crew of shirtless youth with gelled up hair and acid-wash skinny jeans.

Indie-pop charm at its best. "Afon Minnk Madam" is a cute and fluffy song by the independent musician and songwriter Atef Malhas, from Amman. Comforting vocals mixed with ukulele-infused indie pop elements create a song that makes you feel warm inside, paired with a music video that is just as romantic and charming as the song itself. Directed by Zeina Darwarzeh, it stars Tunisian artists and Instagram star Amina Abdellatif as his significant other and follows the couple through a picturesque forest while an accordion player, a harmonica player and a drummer play the chorus.

Slowly but surely the trio makes it way to recognition in the alternative Lebanese music scene. "Debug" is taken from the indie electronic band's debut EP System Failure. The music video reflects the artwork of the album, and the band describes: "Overall, the music video is about us trying to reach the different environment, the water, while we're stuck in a very concrete one. By the end of it, you can see us going through the environment and reaching the water and getting reunited with the potential (the girl). So it's the idea of us trying to reach the potential and free ourselves of the system." Deep.

The newly founded Egyptian collective Kahareb sees Youssef Atwan of Like Jelly re-enter the scene. The music video to El Sauce celebrates the arrival of Kahareb in style, with a simple but slick video, where the outfits and set are on point.