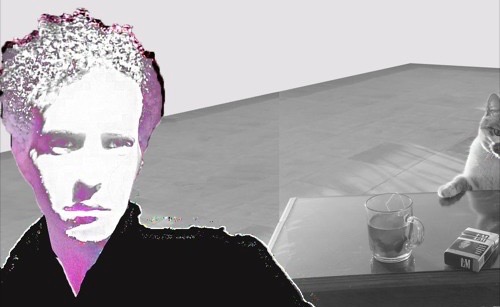 Youssef Abouzeid remains one of the most groundbreaking artists to come from Egypt’s alternative rock scene ever since he first emerged in 2012. Starting several projects like PanSTARRS, Kelab, ElManzouma and Shlomo Casio, Abuzeid managed to steer clear of the endless categorizations that can corner a musician into limitations. From shoegaze, to dream pop, to indie, cementing an identity within a genre was never the aim. Now, over six years and three projects into his musical career, he finally goes solo and has put out his debut album for us to pick his brain, discover his influences and find out where he’s at musically.

Captain Solo is an eight-track album that is not only Abouzeid’s debut album, but also Hizz Records' debut release, who are known to push the underground music scene and more unique artists and sounds. This is what makes it a tailored fit for Hizz Records’ inauguration. The LP traverses a number of different, yet interconnected soundscapes, but preserves a raw, grungy, lo-fi approach, harking to art punk with hints of new wave. Basically, what one could refer to as retrofuture.

Album prelude, 'Sahla 2', is a gloomy yet oddly joyous track boasting an electro-inspired bass line that builds up in tempo and intensity underneath stirring Arabic vocals. It starts out with a bass riff that keeps looping in a slow tempo and going faster to reach almost double the speed by the end of the song. Along with the tempo increase, the whole track escalates with atmospheric foley, reverb-swelled percussion and laser sounds.

As part of the Captain Solo’s pre-promotion, a music video was released for ‘Nice Arp', which is filmed and edited by Malak El Sawi. Showing her own trippy interpretation of an amusement park, it will certainly make you realize how old you’ve became and how the days of yore are unfortunately not coming back. The track mainly relies on a programmed arpeggio that plays the time signature of 3/4 over sequenced drums carrying a 4/4 time signature, which the video is synced with.

Technically speaking, the album carries a sound that isn’t easily attained without a lot of processing, which requires knowledge from the producer. This can be heard in the distorted drums and the sequenced elements throughout the album, resulting in the creation of a unique sonic palette. On a sensory level, Abouzeid’s album is captivating; you often find yourself catapulted in and out of darkness and sometimes pass by a lost space in between — a mind-boggling experience that relies on precise synthesis techniques that create a world made of sounds that you rarely hear anywhere. It’s a world you don’t visit every day. Captain Solo’s world.

* As the album is only available on cassette, contact Hizz to get your copy.
Keep up with Youssef Abouzeid on Soundcloud.
Follow Hizz on Bandcamp, Soundcloud and Facebook.
Previous Article

Alsarah on Being Weird, Sudani, and Finding the "Good Spot"