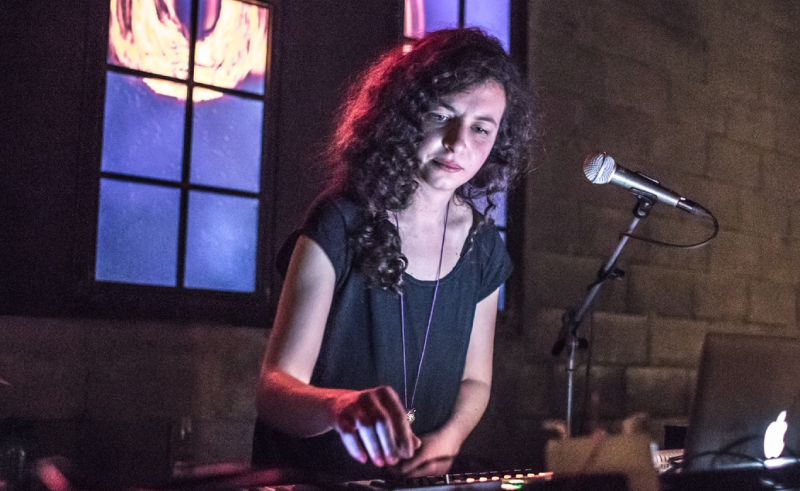 For those who don’t know of Flugen; firstly, shame on you. Secondly, if there’s one piece of information we can start off with to help you hone your understanding of the Beirut-based artist's approach as a maker of music, it would be that she studied film scoring. It may seem innocuous in the grand scheme of more and more artists entering the scene with some kind of formal music education in their back pocket, but it goes a long way to getting inside her mind.

Real name Maya Aghniadis, Flugen has long experimented with fusion, a word that is becoming more and more reviled in music circles who condemn its loss of any real meaning - if it’s LIKE rock but ISN’T quite rock, it must be rock-FUSION. For the span of her music-making life, however, Aghniadis really has being ‘fusing music’ in a most literal sense, creating a shifting sound that traverses ethnic beats of the Middle East; soulful and emotional melodies; evolving, ambient soundscapes; and a cinematic, storytelling-approach to composition.

In 2017, Aghniadis officially let loose the genre-defying alter ego that is Flugen, releasing Lost Banjo in 2017 and Ondes in 2018. They set the tone for her mix of electronic and acoustic instrumentation, but what’s interesting about the two releases is that, though they have their own defining characteristics (with the latter weaving in more vocal harmonies and progressive melodies), they would eventually merge into one to create a musical show by the name of Qitar. In it, performers of various kinds took to the stage too strut their stuff to the background of Flugen’s music. The same would come of her following album, Dreams & Colors, while collaborations and connections made through that show would go on to produce her fifth album, Meshwar.

Why is this all significant? Because her latest album, Poupayee, comes as an extension and expansion of all of this. In a similar way to her five previous releases coming to form some kind of natural, symbiotic chain of progression, this album seems to feed not just off of its predecessor, but all of it. In a way, this is not an earth-shattering release in the sense of ‘the unexpected’. That’s not a criticism, though. There are few contemporary artists in the Middle East whose body of work is as intertwined as Flugen’s. You can hear it all in the album, but at a higher intensity – there’s a sharper use of percussion, the atmospheres are more densely cinematic and the shackles have been loosened.
As a result, the term ‘ethno electro jazz’ has been banded around by the artist’s camp to try and rationalise the unexpected, sometimes blindsiding ebb-and-flow of the ten-track album. It’s exactly this sense of ebb-and-flow that’s key to 'getting it'. This is no easy-listening and ideally requires the album to be heard in full – to be committed to in full, in fact. “Poupayee tells the story of the different states that a mind can go through,” says Aghniadis has said. “With every step we come closer to surrender and release to all the shapes of truth.”

‘Aal Saket’ displays the first signs that this is neither ‘ethnic’ nor ‘jazz’ in the traditional sense, it’s beat and pace in a constant state of change. Rhythmic in places, anthemic in others, ‘Shades of Blue’ makes way for a dive into a more synth-laden space in ‘Different Ways’, it too in a constant state of change. The title track features singer, Ralph Harfoush, his easy vocals taking the album into a clearer, sunnier territories alongside Aghniadis’ piano.

From there, the jazz influences become a little more direct, particularly in ‘The Lodge’ and the ‘Peak’, each clacking and snapping cinematically. It’s not all straight sailing and they’re layered between more seeming swerve balls; the sharp warbling and elusive beat of ‘Something Wild’; the ambient droning of ‘Where to?’; and the 80s inspired synths, grand piano explosion and unexpected vocals of ‘Surrender & Release’, which feels like the beginning of an album, not the end of one.

For some, Poupayee will initially feel disjointed and divided, maybe even confused and confusing. Many of the tracks certainly will be in isolation. It’s not too much to say that some feel incomplete; but they’re incomplete without each other. It marks subtle but significant growth of the Flugen sound, with Aghniadis taking it where it needed to be taken.