Lebanese indie electronic band Gizzmo lead us through fighting the system through machines.
by SceneNoise Team 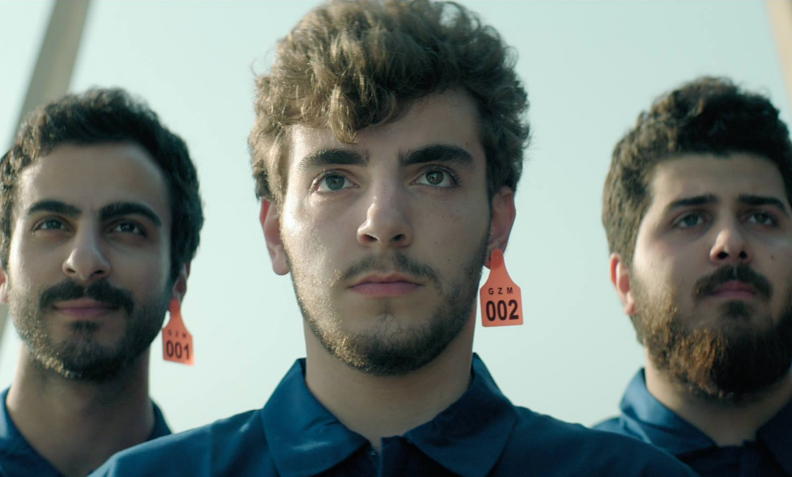 Hailing from Lebanon, the trio behind Gizzmo are slowly becoming an icon in Beirut’s thriving music scene. Floating somewhere between the indie and electronic worlds, they have themselves a unique sonic signature, a result of fusing their diverse musical backgrounds. Alex Chahine, the wizard keyboardist, mad synthesis nerd, and vocalist has a foundation of classical music, rocking the Conservatoire National since the age of six, before getting into jazz and blues. Camilio El Khoury, their low frequency throttler, started his musical journey at the age of seven, and Joy Moughanni, their rhythm operator, started a bit after them at the age of 12, studying rock and jazz theory before getting into the vast world of electronic music and noise. Each one of them represents a piece of a puzzle that fit perfectly together when they met in university.

In contrast to this purely organic and classical music background, the guys from Gizzmo blended their diverse backgrounds through machines to achieve an original outcome wholly theirs. “We found a lot of potential in sound design, not just electronic, but with combining organic and electronic. We really like what the Gorillaz did, Palms, Tame Impala, and especially what Thom Yorke did with his project Atoms for Peace.”

It is clear that this group definitely has a sense of humour and spontaneity: this is how they chose the name Gizzmo for their project, which is basically the point of intersection of the X,Y,Z axes in a 3D modeling application they use. This represents their different musical directions intersecting in one point. Boom. Gizzmo is also a machine.

Earlier this year, Gizzmo released their debut EP “System Failure”, that is hip, serious and original on Beirut's imprint Fantome De Nuit Records. Not only this, but the album holds the story of both Gizzmo the machine and the band, as it tackles social controversies in the world we live in, told from Gizzmo’s perspective. We sat down with the guys who exclusively unfolded the story of System Failure to us, with a breakdown to all of the songs and what they represent in our modern world.

The album has two thematic levels. Primarily, it takes place in a post apocalyptic world, in which a new generation of people finds an old machine and reboots it, integrating it into the population. But this machine has gone through a lot more than those people, having advanced exceptionally before the earth was rebooted. Thus, it can teach a lot to the humans, but they are stuck in a system. This concept of the album is addressing how people become very stable in their ways, and wouldn’t try to evolve into something else - they’re very satisfied with where they are and start to impose themselves on others, despite the fact that there is a better path. On a second level it’s about how the machine is being getting thrown in and out of educational, artistic and business systems. Without further explanation, we will let Gizzmo walk you through System Failure.

"Intro": This sets the scenery where everything goes down. You can hear footsteps in nature, but at the same time electronics and machines in the background. You notice the chaos, and the juxtaposition of nature and technology. You imagine very rustic machines with plants growing out of them.

"Debug": This is about us being introduced to the world as artists and students. It's about getting taken advantage of us, which is something that has happened to us. We almost had this record deal with a Lebanese guy who was promoting artists but at the same time was scamming them. He was like, “yeah, we’re gonna tour the world and destroy the world, but you guys are not worth it yet, so we’re not going to pay you, and we’re going to make investments in you name.” We didn’t take the deal and later found out that a lot of people went through a lot of trouble because of this guy, so we dodged a big-ass bullet.

"Birthed": This represents the birth of the machine. It's the people rebooting the machine, turning it on and trying to see its background. Basically this is how we introduce the machine to the public.

"Flux": This is actually us in the educational system. How someone is very imposing upon ideas. In the art world there is no right and wrong, but in Lebanon there is. In the end you find yourself not working on your own project, but on your teacher’s fantasies and making them come to life as you’re trying to put yourself through. You’re not making you’re creation, but you become the other person’s creation just to pass your class and not hit the wall.

"Interlude": This is basically a secret track, as it’s not on the CD but it’s online. It’s an instrumental piece that we’re not playing live at this moment because we cannot transmit the same sound live yet. The machine here is very confused and doesn’t know what it should do or should be. The system is very imposing but at the same time is failing and auto-destructive. Everything in Lebanon is working fine for now but is obviously going to crash eventually because it’s very greedy. It doesn’t think on the long term, it thinks on the short term. "Interlude" is an intro to the next track, "System Failure," where the machine realizes that it cannot fix all of that and just has to go through it, because the system is going to be that way.

"System Failure":  This is an answer to the entire album. Each paragraph is an answer to each song: the first paragraph is the machine thinking about the short term solutions and always trying to see a lot of information and a lot of things that are thrown at you as a kid, that you do not need to think about as a kid. You’re trying to make it as a musician, but at the same time you need to make money in order to live.

The second paragraph is very social and talks about how when someone tries to say something different, they are shunned. It's about how fake happiness is on social media; a way of showing how powerful or how rich or how "happy" you are through your phone, and you take your phone to show the best moments to people who are following you around. People are thinking “okay, I want to show people that I’m there" even if you’re not actually there enjoying it.

The third paragraph talks about the thoughts of the "popular". Before what you do gets popular, it’s kind of frowned upon. Every one thinks “It's not going to work, nobody likes this.” Eventually it gets popular, and becomes artificial.

The fourth paragraph is the one that represents our state of mind through people who are into fads, treating music as fashion statements. They take what works for everybody, and because it works they make it. It’s fake for them, but not fake for the people who are trying to do it from the start, and it kind of ruins it for everyone. It’s kind of easy for them to go into this and that, to change their own sound and copy stuff that is already there, that’s already successful.

In the "Debug" music video we reflect the artwork from our album. You can see the repetition of the people standing, representing the system, and you can find the machine which is in between. The repetition of the people that are glitchy, represents us. In the music video we’re very stiff, without soul. We’re looking right through your eyes but you can’t feel anything, there’s no emotion. There’s this girl in a different environment, which is the machine basically, the potential. Overall, the music video is about us trying to reach the the different environment, the water, while we’re stuck in a very concrete one. By the end of it, you can see us going through the environment and reaching the water and getting reunited with the potential (the girl). So it’s the idea of us trying to reach the potential and free ourselves of the system.

Catch Gizzmo in the Wickerpark Music Festival, Beirut on September 8.