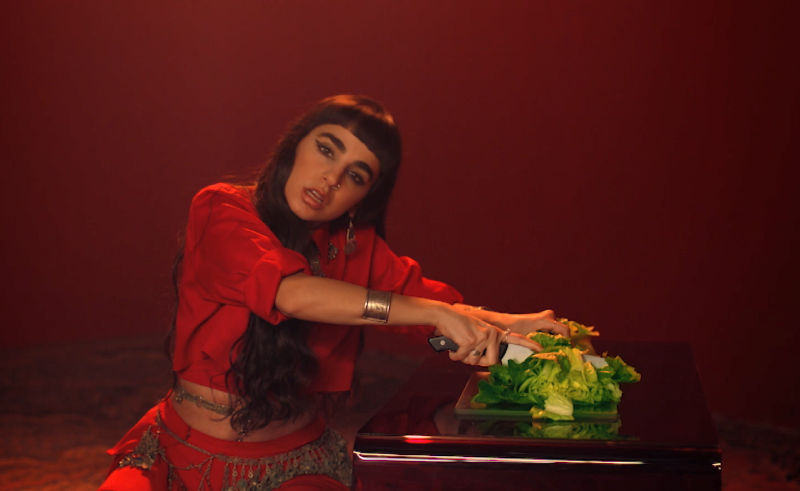 Rémie Akl is a storyteller in every sense of the word - an utterly unique and unpredictable one at that. The Lebanese artist pushes any and every medium to its creative limits, the latest example of which comes in the form of an incredible new one-shot video for her single ‘Ashekt Rouhak’ (You Killed the Heart), a track she worked on with king of the Lebanese underground, Zeid Hamdan. Keeping in line with much of the work Hamdan has done as a producer over the last 12 months or so, the track itself draws on both Arab and contemporary electro influences, stripping them both down for an altogether minimalist piece that puts Remie’s vocals front-and-centre.

The video is nothing short of extraordinary, using the endlessly tricky one-shot method as a storytelling tool, not just a gimmick. It first opens with Rémie providing an opening monlogue over images of bloodied male hands striking down into an apple that she explains represents her heart. It doesn’t take long to position the entire song as a story of love scorned, as Rémie and a troupe of black-clad mourners stand together in some kind of heart-shaped coven. “This video is about a young lady who has gone through a separation and is in deep mourning,” Rémie explains. “In this piece, she expresses the state of her broken heart. She who believes in god, curses her beloved, but with a romanticism that belongs to her.”

The video then sees Rémie perform in some kind of red abyss. She moves from cutting a head of lettuce, to dancing across traditional Arab carpets, to sharing a bed with the murderous apple-hater introduced at the start.

As with all her projects, the remarkable video was conceived, conceptualised and directed by Rémie herself, though a whole host of creatives did their part to bring it all to life, including producer and frequent collaborator, Liliane El Sous; production designer, Ola Chkar; cinematographer, Rachelle Noja; graphic designer, Farah El Samman; and creative editor, Dani Baradie.

Rémie last hit the headlines in December 2020, when she teamed-up with gender equality NGO, ABAAD, to produce a near-genius video that addresses sexual harassment by poking fun at the phenomenon of men referring to women as ‘baklava’ - yes, the traditional sickly-sweet Middle Eastern dessert. In less than three days, it racked up an incredible 3 million views from across the region and beyond. Dressed-up as a kind-of tongue-in-cheek, well art-directed public service announcement, the video further cemented Rémie as one of the region’s most distinctive and creative voices. Check out the video below.