Get acquainted by our little chat with house French producer Leo Pol before his outs:de Cairo live set.
by SceneNoise Team 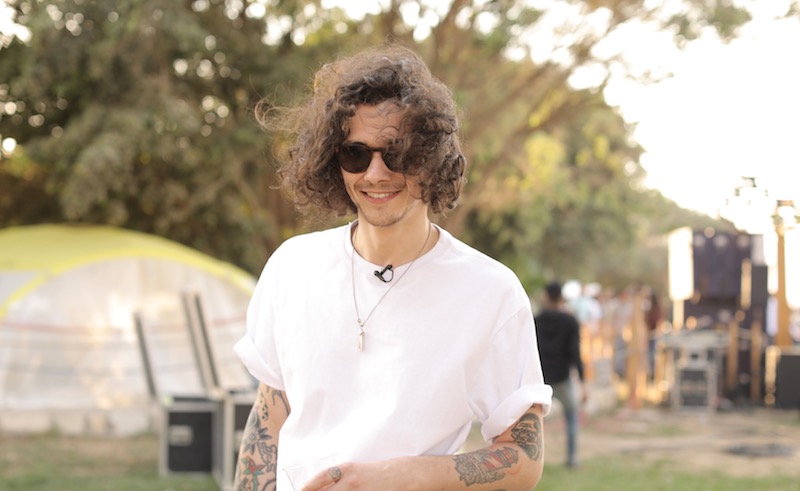 Hailing from France is the 25 year old rising house producer Leo Pol. Using his arsenal of classic synths, sequencers and vintage drum machines, his output is often grungy, yet melodic. His first release was on VELVET back in 2014, which made him gain recognition and sign to Olga Korol’s Body Parts. Two years later in 2016 he signed a residency at Paris’ infamous house and techno club, Concrete, that was listed as one of the world’s 12 best clubs by Resident Advisor. Ahead of his performance at Outs:de in Cairo, we had a quick chat with Leo about his career and his impression of the Egyptian scene, before he went to the stage and fucking killed it. His live set was one of the best we heard this year - fast, hypnotic and captivating.

What are your first impressions about this kind of party?

I think it’s really awesome, it is not possible in Paris because the police tend to show up! Here, it’s insane! Really, everybody is nice, the music is good, Funktion 1, good!

What was your reaction when you first knew you were coming to play in Egypt?

I was so happy man because the first time I came here I was 13 years old, so it’s been a while, almost 12 years. I was really happy.

I started playing the drums when I was 6 years old. I later joined a number of rock and punk bands.  On my first day of high school, my neighbour gave me an Ableton live CD - that was 12 years ago. I hadn’t yet started producing any house or techno back at the time, it was more rock with electronic sounds, and yeah, that’s how it started. Year after year I got better, and so did my taste. I finally knew where I wanted to go.

Do you remember your first piece of equipment?

It was the Vermona kick something - it basically did kicks.

How do you see the difference between the scene in France and here?

In France, I’m not gonna say it’s too much, but it’s everywhere, like every weekend there are five different headliners in five different parties, outside and inside Paris. There’s a lot happening and there’s a lot of public involvement also. I don’t think that there are a lot of people who know this music here, but in Paris, it became so wide that everybody is listening to this music. You will find 10 different clubs playing this kind of music every weekend, so it’s bigger but the quality is here! It’s one party but it’s quality!

How long have you been professionally involved in the music scene?

I stopped working 3 years ago. Before that, I was playing every week but I still had a job and I didn’t make enough money to live on. Now, it’s only the music.

What are your likes and dislikes about the scene?

In some countries, I think people are a bit too close-minded, like, “I have this song, I’m going to listen to only this.” Like, if you’re on the side of B2, like another style of music, you will not get a booking or anything. We should all be open-minded, we should all be friends, in the end, we all have the same love for the music. At one point we all have different tastes, so, sometimes I’m going to be more house, sometimes electro. I love the US sound, some people are going to love whatever. I don’t care, I’ll go to the party and just be open-minded, that’s it.

What do you mean by open-minded?

Tolerance man, just like in Paris, I’m really close with the people from the minimal scene and really close to the techno guys, I go to their parties, dance and have fun. Of course at the end of the day it’s not going to be the music I will produce. Actually, it’s a lie, I’m producing techno also. We should be a bit more tolerant.

Do you only play live or do you DJ as well?

I DJ when there is an after party at my place but for my friends and that’s it. I don’t feel confident enough to play as a DJ in a club, I’m scared of the song in a booth, you know? Like the music will be too loud, and I’ll have to put loud music in my ears. I’m 100% sure that I’ll do it, but not now.

I feel that having a live setup is riskier and scarier than DJing, isn’t it?

Did this happen before? Having something in your setup not working just before the show ?

Of course it happened yeah, I was playing in Rein and after the soundcheck we had dinner and when I we went back, nothing was working. The next day we saw that a guy from the club crew came and touched all the gear, filmed himself, like, live streamed himself on Facebook jamming on the 909 and everything - after that nothing was working. When I went back to Paris, I had to change my sound card, I don’t know what he did with it. It wasn’t a bad experience for the public because they didn’t get that I was mixing my own tracks but for me it was weird because I felt like I was robbing the crowd. The way I play live makes you feel like it’s a DJ set in a way. I’m not in a competition with DJs but I need to be as good as the people who select the best tracks for everyone. I need to think my live performance in a club way because people are partying, they want to have fun, they want to enjoy and dance to the music, so my live set is not a DJ set but I’m still competing, not competing but you know, I need to be booked again, so, I need to play a live set that stands out.

Why aren’t you releasing a lot of music?

I have like a thousand tracks ready but I need to select my best music and also, I’m keeping a lot of tracks for later. I mean, if I’m happy with a track now and happy one year after, I’m going to still be happy with it after 10 years. For example, my first release three years ago was sold quickly; the prices went crazy and everyone was asking for a second press. I work with my best friend, he manages everything and I produce the music. He always has my back and he is always asking me to change things in the music. We actually finally found the four right tracks this week. I’ve been working my ass off for the past 4-5 days and man, it will be a really nice release.

So, tell us about your creative workflow.

I like to wake up early, have coffee and a cigarette and then start producing. I switch on all the machines and start playing around and when I have my loop and everything, I record everything live.

How do you create a mood for your tracks while sitting in a room?

I never think about where I’m going with the track, most of the time I start with the beat, I switch on my drum machines and oh, this sounds a bit like electro so yeah, lets find a nice bass, and using more arpeggiators when I’m doing electro and when I’m doing house I need to find a nice sample but I never know where I’m going to go! Maybe by the end of the day I’ll have two tracks ready, one track, nothing...it depends!

What drives you to make music?

I think life is so weird, I really don’t know why we’re here and then the thing that draws me a little bit is beauty. So it can be something like paintings, sculpture, love, and music is a part of this. Music makes you feel something that you can’t always put words to. It makes you feel human and grounded in a way, because, if not, then why are we here?

Do you make any other kind of art?

I used to make sculptures but I stopped, I want to do it again. Two weeks ago, I started to paint, but not like art, it’s more of decorative art so I put all my soul in it like real painters would do. I got really inspired, I copied my little sister, my sister is an awesome singer, producer, painter and I wanted to paint so I bought paint and I was like what am I going to do with all that stuff? So, I copied my sister and she was my inspiration!

What inspired your music?

It’s a guy called Alex J, American dude, I have like three records from him, I got my inspiration from his music. I don't like to get inspired by anything, I know that many producers are going to listen to a track they love and say I will try to make something similar. I hate it, I like to have my own style and I’m trying not to have any inspiration from anywhere.

Speaking of your style, what can we expect from you today?

I’m going to play fast house and techno. Still deep and with a lots of melodies.

Keep up with outs:de here.