Over the years, Arabic words have slipped into use by German rappers of mixed descent. In order to shed some light on this trend, we talked to a few participants in the scene. 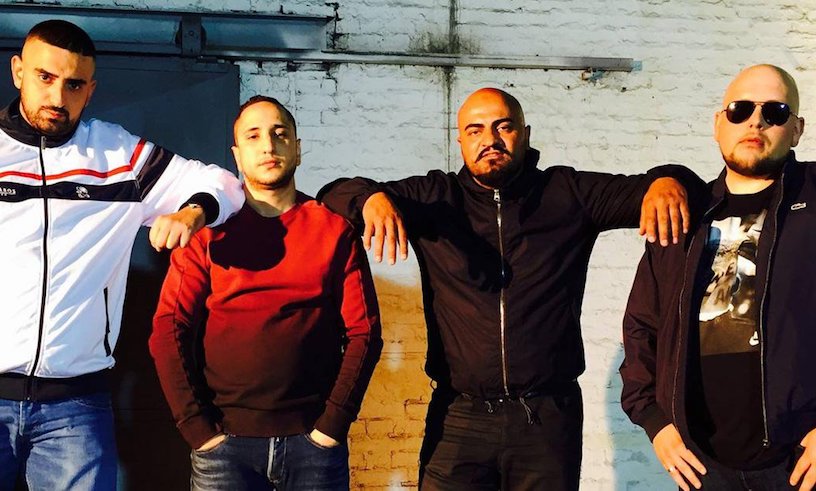 A look into the history of hip hop music proves that the usage of Arabic language is far from a new phenomenon. On the contrary; in the United States or France, Arabic words have been included from the very beginning of the genre. On the one hand, the inclusion of Arabic words in American hip hop is mostly in form of invocations and prayers of Islam. This is closely connected to movements like the Nation of Islam or historic key figures like Malcolm X. More about this topic can be found in a short documentary by Genius we covered earlier. On the other hand the Arabic influences in French rap are linked to former French colonialism of the Maghreb, and the ensuing influx of immigrants from the region.

In comparison, the fact that Arabic is also popular within the German rap scene might be a bit more surprising for most. While Germany's music scene has made itself a name with metal bands like Rammstein or famed electronic music producers like Paul van Dyk or Sven Väth, the local hip hop scene is mostly unknown in the international spotlight. In fact, the history of hip hop and rap in the Middle-European country is a relatively young one and happened as a result of the commercialization of rap in the United States. Thanks to American soldiers who were stationed in Germany in the 1980s, the genre started to then gain a German audience as well. It wasn’t until later, in the 1990s, and due to the efforts of the rap quartet Die Fantastischen Vier, that the music style actually got popular and eventually made it into the commercial music charts. Starting from there, hip hop and rap reached an unknown high and excited the crowds with its signature witty and ironic lyrics that mostly hit on easy-going topics.

A brief shift happened during the 2000s when gangsta rap took lead in the German scene, kicked off by battle rappers like Bushido and Azad. With the rise of artists like Berlin-based Bushido, who has a Tunisian father, or Azad from Frankfurt am Main, who has Kurdish roots, the 2000s also mark the time of more and more artists with immigrant backgrounds impacting the formerly very white (and male) dominated German hip hop scene. The lyrical topics also underwent a change, and deviated from addressing important social issues like unemployment, racism, hopelessness and lack of perspectives of the youth, to tracks that glorify violence and drug crime. Generally spoken, the ongoing influence of artists with diverse cultural backgrounds can be viewed as the starting point for the rise of inclusion and mixing of languages other than German in the local scene. Currently Arabic can be viewed as one of the languages predominantly used in German rap.

To gain some more insights and opinions on this hot topic, we teamed up with two hip hop artists as well as two music experts of the German rap scene. On the artist side, we spoke to Presslufthanna, a female rapper from Kiel in Northern Germany. Hanna discovered her passion for rap and hip hop eight years ago, and since 2013 has been releasing material that oscillates between aggressive and thoughtful. We also talked to the Hamburg-based urban artist with Moroccan roots, Abdel Khalil aka D.N.A. He has been releasing songs and music videos for around six years now and describes himself as “a perfect example of a Moroccan rapper living in Germany and an artist that aims to create images through words”. For some expert knowledge, we spoke with 29-year old Hubertus Koch, a filmmaker, journalist, host of his own YouTube series called “Einigkeit, Rap, Freiheit” (engl. Unity, Rap, Freedom) and hip hop fan since he was 17, as well as Alina S. The Berlin-based master student has been working in the music industry for one and half years now and is currently employed at a big German label where her expertise lies in hip hop with a focus on German rap.

"Yalla", "kahba", "akhi", "habibi", "inshallah", "mashallah", "wallah" - the list of Arabic expressions that can be heard in German rap tracks goes on. Not only German rap itself, but also the usage of Arabic words in tracks, has experienced a commercialization over the past few years. Hanna and Alina have noticed the trend of including Arabic words in German rap as something recent, and would place its beginning within the past three to four years. On the contrary, rapper D.N.A. and music host Hubertus argue that this development has been taking place for at least ten years now. Both agree that tribute to the evolvement of this trend has to be primary paid to Kurdish Rapper Haftbefehl from Frankfurt am Main as the one who started to casually integrate words from several languages into his rap which influenced others to do the same. Next to Arabic, the Offenbach-born rapper also plays with elements of Turkish, Kurdish and even Zazaki language in his lyrics. Furthermore, there are now plenty of other artists who play with Arabic vocabulary in their lyrics, such as rap duo Celo&Abdi, Palestinian rapper Massiv from Berlin, Moroccan rapper Miami Yacine or German-Kurdish rapper Xatar to just name a few amongst many.

To explain this movement, there are many aspects that have to be considered. For Hanna a possible explanation would be that artists want to include their mother tongue to make their origin or parts of their identity visible to their audience. The Kiel-based rapper elaborates that for her, hip hop culture is and always was marked by the influences of black people and people of colour, and she claims that "artists aim to empower their listeners with celebrating their diverse origins in their tracks". Especially in Germany, Hanna believes that multicultural rap artists want to prove that there are not only white musicians in the scene, and want to set an example that shows that Arabic language is a part of multicultural Germany. This is an important step, especially with the current rise of anti-Muslim and racist discourses in Germany and on a global scale.

Urban artist D.N.A supports her opinion with his own example: his inclusion of Arabic mostly happens instinctively, as he says he is very shaped by his childhood spent in Morocco. In general he believes that “music is an innovative art that transports feelings and creates new things” and enjoys mixing languages such as Turkish, Spanish, French or the typical Hamburg dialect called “Hamburger-Schnack” next to Arabic to flex the full range of artistic freedom. Both representatives of the other side of the music industry, Hubertus and Alina mostly identify rap artists with a Arabic/Maghrebi background as those mixing their heritage tongue with the language of the culture they grew up in - German.

As mentioned above, over the past years German rap has been commercialized, which can be measured in its appearance in the music charts as well as on the radio. The success of tracks that feature Arabic language elements make it certain to say that this trend has made its way to the mainstream now. Alina describes that this is closely connected to the change of beats that are used on tracks that use Arabic vocabulary. She explains that while in the beginning it was mostly hard German gangsta rap that focused on the rapping itself, there are nowadays a lot of upbeat, club and radio friendly hip hop tracks with Arabic elements attracting a wider audience. Hanna adds that in her opinion a lot of youngsters especially enjoy hearing some Arabic words on a track because they think it sounds cool and creates a more powerful, meaningful vibe than just using German. Last but not least Hubertus observes that the general reaction to the mix of languages in tracks is connected to factors such as social status or heritage and can vary from perceiving it as either very natural or very irritating.

“Rap is probably the biggest and most influential youth culture” states Hubertus, also pointing out that Arabic and Middle Eastern culture has not only made its way into German rap, but into pop culture overall, with TV series like 4 Blocks, Dogs of Berlin or Datteltätter (Engl. “date offender”). It is therefore safe to say that Arabic language is now widely included in the vocabulary of the German youth culture, and has found its way into the language used by kids of all social backgrounds. It should also be noted that not only Arabic, but words from other languages are now widely integrated into the slang of German youngsters. As a conclusion, the rise of mixing languages can be viewed as a beautiful representation and appreciation of a multicultural German society - which is becoming more mixed with the influx of refugees - that still celebrates diversity, even in times of a growing and more violent form of far right European populism.

Mashrou' Leila Back With New Single "Cavalry" Ahead of Forthcoming Album