Innovative PanSTARRS' Youssef Abouzeid talks music, talent, invention and just having that musical 'edge' with staff writer May Mansour, as they discuss the current scene and their future plans.
by SceneNoise Team 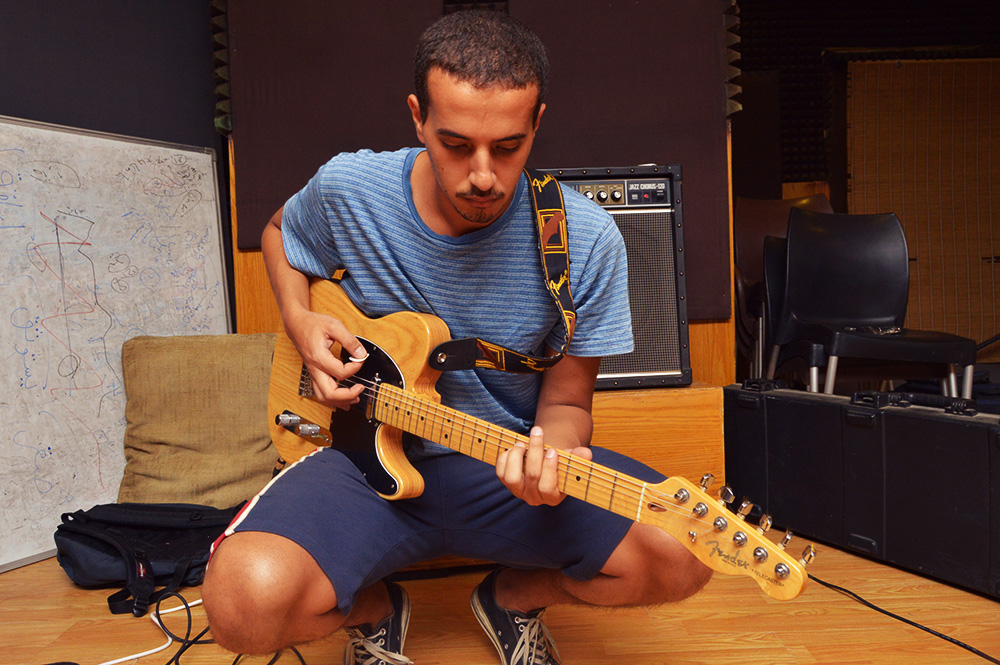 I was at Cairo Jazz Club one night a few years ago when I decided to check out PanSTARRS. My mate, Nader, was on guitars with his cousin and front-man Youssef Abouzeid who created a sound which we now hear hundreds of artists reproducing. It was avant-garde at the time I suppose. I enjoyed their set while standing by the bar having a glass of whiskey, and I saw something in the making there, but what I imagined is nothing in comparison to what actually erupted from that band!

I underestimated them because -with the ever increasing amount of sub-genre formations or trends, coming into the picture, from Dream Pop to Shoegaze to Post-techno-wave-psychedelic-what-the-hell-is-going-on or whatever, PanSTARRS' chill out days were well numbered. This was mainly because things got quite mundane for Abouzeid, as I secretly hoped they would, and they very well should, for any artist with a proper creative flair and an itch to distort. “We had a pretty mellow sound when we first kicked off PanSTARRS, it was interesting but it wasn’t good enough,” Abouzeid admits as we sit and have a chat after their first studio practice. “Or I guess it got boring and bedan especially when we went live so it didn’t really feel complete; enter our second EP Yesterday. We were the first band to play at Vent when the venue first opened, initiating our adaptation to a more structured sound and a set list to follow.” PanSTARRS have always been pretty much a one-man band, especially around the time of their first low-key EP Nothingness when Abouzeid considered himself a bedroom artist, so to speak. Their second EP gave birth to reverberating guitar effects, obscure vocals, Arabic lyrics and a full-on band ready to play gigs with Hazem Shamy who’s the only consistent member of the band on the drums, and bass duties fluctuating between Nader and Ismail. When I saw PanSTARRS once again at Vent in 2014, I was nothing short of flabbergasted! They mostly played songs never before heard on either of their previous EPs with a full on, robust throttle of a sound, almost like The Jesus and Mary Chain on a heavy dose of Speed, incorporating Punk elements and faster than ever before! Intense energy went back and forth between the audience and a band that was simply reinvented to total, unreserved potential. Their much-anticipated, upcoming EP is out in a month. “I’ve been working on the next EP alone, top to bottom, and it’s just influenced by everything we’ve been working hard on since we developed our sound. Although it still has nothing to do with the set up we’ve been building up to as a band but it integrates the sound I’m after nonetheless. We won’t be having a release gig for it either but we’ll release it online just to keep things going! It’s a complete DIY project once again; I took a scholarship production course at Epic101 studios and decided to exercise the skills I learnt on this next EP," says Abouzeid.

"So what’s it called?" I asked enthusiastically, only to be answered with: "I don't know." There’s an atmosphere of modesty surrounding PanSTARRS and Youssef Abouzeid, despite his somewhat abstruse sound and menacing lyrics that when asked about, gave me yet another “I don’t know.” A 'music first, thoughts later' kinda fella with an interesting take on lyrics, he added “I don’t know what I sing about – personal and introspection stuff, depressive at times, aggressive at other times, inspired by the people around us and the life we deal with - I just mostly improvise at the studio and during our gigs. At first it was a complete lack of interest in writing lyrics but it’s getting there, I just feel the need to record all the music first to get a grip on it.”
Abouzeid and Shamy are both quite minimal in nature, as opposed to the fury they demonstrate when up on stage and through their music endeavors which they’re looking to employ once again now that Shamy is done with involuntary military service. “We’re pretty much ready to start heading down to the studio more often and work on our stuff. I suppose once we find a consistent bassist to join the band we’ll get more active”. PanSTARRS, against all odds, still call themselves an Alternative Rock band; they avoid glamourising themselves or overemphasising what they do, which in itself gives them the respect they deserve. They gained some significant international attention - especially for a band that has worked from the comforts of their home and local studio most the time - from labels and other Alternative Rock and Indie bands around the world. “There’s a label in France called Anywave; they sorted me out after I released my first EP and helped me network with other artists,”  states Abouzeid, who knows where that’ll take them next. They’re already looking forward to touring internationally once they have a steady line up in place. The lack of musical platforms in Cairo poses a threat to uprising artists who revel in a different edge. All we ever see around here in Egypt are mediocre, if not entirely untalented acts. Thanks to the venues and events managers who seek only the norm in the music industry, just to play it safe and make their sales, they barely ever support true talent trying to break through. “Nothing in the music scene in Cairo interests me enough,” says Shamy. “Sometimes I come across bands at venues that I end up listening to by accident, and I can’t imagine going on SoundCloud or something to check out their stuff later. And I’m not into people repeating everyone else.” Abouzeid goes on to explain that “It isn't music. It's just entertainment. Most people’s tastes are terrible, no one’s trying to do anything different, and even when they try to do something different, as in something new, they can’t create a standard for themselves, aesthetically; it remains uninteresting, or uninspiring.” Both Abouzeid and Shamy are hardcore Sonic Youth fans and express their love for Suuns' new album, “It’s fucking cool!” PanSTARRS are constantly supporting local and international underground artists on Facebook where they’re up to date with every new release from any artists they appreciate, so you can head to their page and have a listen and compare quality stuff, Egyptian or other, that’s worth promoting, to the mediocre nonsense we blindly support in the country. Abouzeid is also part of another project called Shlomo Casio, as well as once being part of a band called Manzouma with Ali Talibab who does spoken word, while Shamy also works with May Waleed on her solo project and has his own new solo stuff which he’s still working on. So stay tuned and be sure to check out PanSTARRS and their affiliates.

10 Step Guide to Behaving While Raving