Naujawanan Baidar: Channeling Afghan Psych in the Deserts of the Southwest

N.R. Safi of American psych-rock group The Myrrors explores his Afghan heritage in the most imaginative of ways. 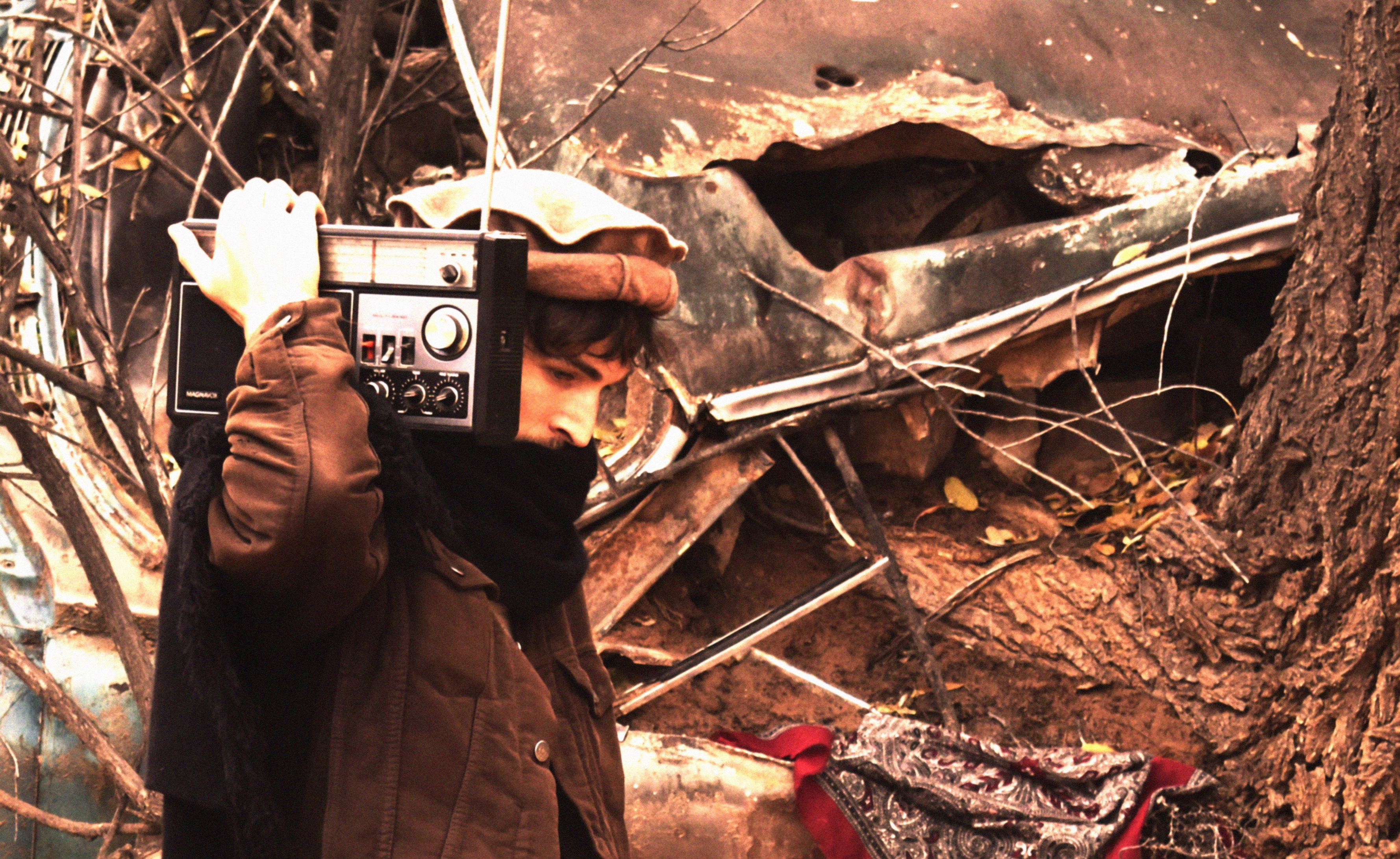 Put a dervish brotherhood from the Hindu Kush in a room with Afghan folk instruments, multiple tape recorders, and a box of psych records from the '60s and '70s for an eternity, and imagine what would come out. That is the sound of Naujawan Baidar's Volume 1.

Naujawanan Baidar (Farsi for Enlightened Youth) is the newest project of N.R. Safi, founder of the acclaimed Tucson, Arizona based psychedelic rock group, The Myrrors, with whom he has been recording and touring internationally for over ten years. Currently based in Eindhoven, Netherlands, Safi is juggling both continents and projects. As Naujawanan Baidar, he just released Volume 1 on Radio Khiyaban, an Eindhoven based label that Safi co-founded.

Though he grew up in the Southwestern deserts and mountains of the US, his artistic notions heavily influenced by the palpably psychedelic Sonoran Desert, half of Safi's bloodline hails from Afghanistan, an importance that crept into his consciousness during high school - not an uncommon American story. "I didn't really have an active interest in it [Afghan heritage] growing up in the US and Europe and trying to 'fit in' to the dominating cultural landscape, as most children do. It was not until later, around high school maybe, that I really started to appreciate and explore that side of my heritage."

Eventually, when not making psych-heavy 'Sonoran trance music' with The Myrrors, Safi was exploring music from around the world, especially from the Middle East, North Africa and South Asia, and collecting tapes and field recordings from places like Morocco; this is where the idea for Naujawanan Baidar was born. "The idea for Naujawanan Baidar evolved pretty naturally from the music I was listening to and playing in my spare time away from The Myrrors, but I would say that it really became a serious project after my grandmother gave me my grandfather's old cassette collection from Kabul," Safi reflects.

This tape collection opened him up to the sonic world of 1970s Kabul, a much more vibrant, blooming cultural scene than is to be found now in the war-battered, religiously conservative capital. The artists in his tape collection - Beltoon, Nashenas, Hamidullah and Ahmad Zahir aka 'The Elvis of Afghanistan' - left their mark on the period, with reverb-laden tracks mixing a variety of traditional styles, with Afghan folk instruments and sometimes Western instruments blending together.

It wasn't solely the music that inspired Safi, but the actual tape as medium. "Something about going through all of those tapes piece by piece - many of which had become 'damaged' by the combination of time and environment - started to make me think about the unusual aesthetic potential of the cassette tape as a recording medium. This was also about the same time that I bought my first Tascam 4-track recorder!" Surely, you see where this is going: Safi recorded everything straight to tape.

What would be perceived as the challenges of recording to tape by many are considered advantages to Safi. With the exception of some electronic bass and percussion, he played everything on the album: Afghan rubab, armonia (harmonium), tabla (Indian), and the sorna (zurna). He completed the first batch of recordings quickly, "built up through improvisation and bouncing tracks back and forth between cassettes in order to get however many layers I needed, always routed through an array of effects that gave it an added layer of barely-controlled chaos." That chaos is tangible in the recordings, embodied in layers of fuzz and reverb that possesses its own acoustic quality. "In many ways that made the tape machine become both an instrument in itself as well as the final determining factor in the composition process." In 'Chaikhana Transistor', the jangly, trance-inducing third track, you even hear a stab of feedback in the beginning, and the voice of a singer (surely from an Afghan tape?) playing in the background at some point. There are elements of sound collage to Volume 1, with occasional samples coming into use.

It's an interesting concept; to reimagine the music of your ancestral land which you've never treaded, filtered through the influences of the West.  In certain ways you can enter a mental plane of a place without being there or having been. Though Safi has been trying to make it to Kabul for years, he has been reasonably hindered by the hostile state, despite members of his family going back and forth. "In many ways my personal Afghanistan is largely an imagined place," he says, "built from hearing my family talk about life there and my own research." Naujawan Baidar is Safi's way of visiting this imaginary Afghanistan, and his vehicle to explore it creatively.

The Southwest, specifically northern New Mexico where part of Volume 1 was recorded, possesses "a lot of parallels between the landscapes and climates of Afghanistan.". Stark, rocky mountains with gnarled trees, potent shrubs, vast skies with soaring eagles, the harsh snow and ice of winter - "as far as environmental influence on the music, there is a lot to get you into the proper frame of mind."

His physical separation from the country, however, doesn't sacrifice any integrity; rather, it deepens the conceptual folds. It fueled Safi's vision, rather than hindering him, as "thematically much of this music revolves around the ideas of exile, displacement, and the attempt to restore what has been lost or forgotten." Furthermore, the drastic difference between his cultural surroundings and those of Kabul embellishes the conversation between sonic worlds that Naujawan Baidar is having.

The album is a sonic whirlwind; you feel you are between worlds, between tape players, turning in a trance of distorted melodies and ricocheting rhythms. In the aptly named 'Aftab Zadagi/Signal Disintegration', the instruments are almost unidentifiable, and it sounds like the fate of a radio station as you drive into a valley. With shrieks, thumping bass, and an unrelenting loop of metallic melody, 'Khyber Sound (From Kabul To Peshawar In Fullmoon)' channels what would be the equally adrenaline filled and beautiful experience of passing through the famed and dangerous Khyber Pass, from Afghanistan to Pakistan, in the opal textures of an illuminated night.

It wasn't just a desire to experiment with Afghan aesthetics that drew Safi to create Naujawan Baidar, but a feeling of responsibility that bloomed within the musical concept in the early stages of the project. The base idea was to take the palate of traditional folk and pop sounds from Afghanistan, and mix that with contemporary experimental music in a new way. "The history of the country's music, with an endless string of wars culminating in the Mujahideen and Taliban destroying an enormous percentage of the countries audial and visual artifacts, has largely stifled Afghanistan's ability to develop a strong and multi-faceted artistic environment. What's left is mostly commercial pop influenced by filmi music and a kind of slick, nationalistic folk."

This is where Safi realised his potential hand in adding a different stitch to the tapestry of Afghan history, which isn't only the past, but the present unfolding. "There is a big opportunity today for the children of the diaspora to look to their roots and bring some fresh new ideas to the table - and hopefully, eventually, back to Afghanistan itself. Call this my small contribution to the cause."