With Berlin-based, Beirut-born producer, Khadije (aka THOOm), along for the ride, Suleiman’s latest release as Lil Asaf is another firm step into new territory for Arabic rap, led unapologetically by the Amman-based artist into a world that skews or discards genre at will. It's grimy and dark, but is arguably Lil Asaf's most accessible work yet.
by SceneNoise Team 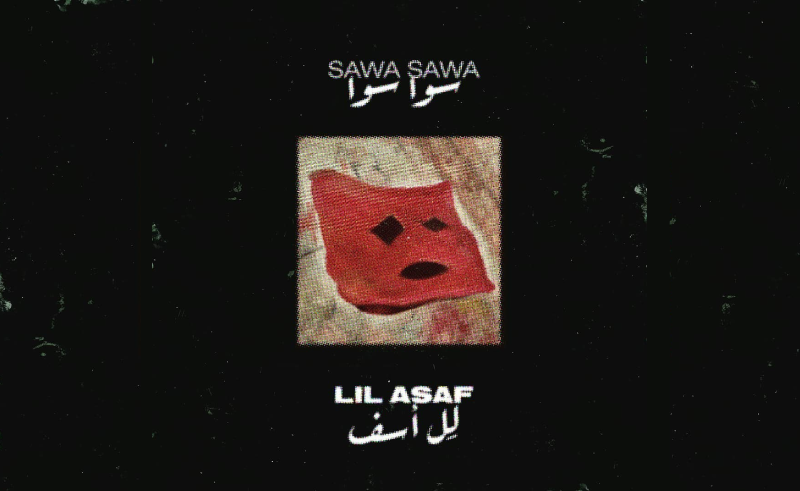 In a first for Suleiman, we find him rapping over beats by collaborator, Khadije, rather than his own productions. Considered a separate ‘entity’ than her productions as THOOM, Berlin-based, Beirut-born Zeynab Marwan’s productions as Khadije form the backbone of the EP, and often outpace Lil Asaf’s laid back, purposefully understated delivery. While Lal Bazam (released on ANBA) came across as a dystopian fever dream of Arabic rap that completely tossed away any desire for mainstream chart appeal, Sawa Sawa sees Suleiman slow things down significantly, replacing the deconstructed- dancehall beats for a deeper, trap-influenced rhythmic signature.

In light of being less boundary-pushing than its predecessor in that sense, however, Sawa Sawa is also Lil Asaf’s more accessible project of the two, with vocals front and center rather than being swallowed up by massive, constantly shifting instrumentals. Track two, ‘Msll777’, shows this best, as Lil Asaf rides the beat smoothly, interlocking his flows tightly with the booming 808 beat and minimal percussion.

Track three comes in the form of the EP's promotional single, '3wwe', which rides with crunchy 808 bass and military-style rolling snare hits that work perfectly against Suleiman’s melancholic rhymes.

The penultimate track, ’Tazfeet’, is by far the highlight of the record, lead by a stuttering, positively stank-face worthy electro-tinged beat that pairs layers of thumping percussion with a haunting, warped vocal sample straight out of an exorcism.

It’s with the closing track, ‘Mbakal’, that the EP loses some cohesion. Featuring his own production, it leaves the album on flat note after the upbeat energy of its predecessor. Featuring a basic looped beat that doesn't evolve much throughout beyond the first minute and a half of the song in direct contrast to Suleiman’s more intentional and intricate arrangements, it feels out of place in the soundscape created and fortified by the previous four tracks.

Ultimately, it doesn’t give the EP the finale it demands.

That being said, Sawa Sawa and Suleiman’s rebirth as Lil Asaf stand firm as a much needed step into new territory for the greater canon of Arabic rap music, which more often than not directly emulates the sonic signatures of the west with little regard for innovation.